Scientists: The connectivity of the brain exhibits a more grid-like structure 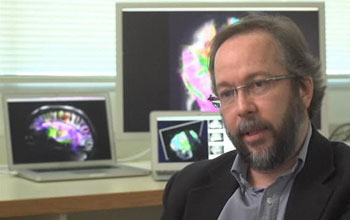 
Research determined that the pathways of the brain resemble that of a woven sheet of fabric.

Have you ever wondered what your brain looks like or how it works for you?

It was previously thought the inside of the brain resembled the assembly of a bowl of spaghetti noodles. Researchers and scientists, funded by the National Science Foundation, have now discovered that a more uniformed grid-like pattern makes up the connections of the brain.

This week's issue of Science magazine details the finding in a paper titled, "The Geometric Structure of the Brain Fiber Pathways: A Continuous Orthogonal Grid."

Scientists from Harvard University, MIT's Division of Health Sciences Technology, Boston University, University Hospital Center & University of Lausanne in Switzerland, Vanderbilt University and National Taiwan University College of Medicine worked together using magnetic resonance imaging (MRI) technology to map the three-dimensional, scaffold fiber architecture of the brain. This technology, used for the first time in this manner, determined that the pathways of the brain pass through tissue that resembles a grid-like structure.

"By looking at how the pathways fit in the brain, we anticipated the connectivity to resemble that of a bowl of spaghetti, a very narrow and discreet object," said Van J.  Wedeen, associate professor of Radiology, Massachusetts General Hospital, Harvard Medical School and Martinos Center for Biomedical Imaging.

"We discovered that the pathways in the top of the brain are all organized like woven sheets with the fibers running in two directions in the sheets and in a third direction perpendicular to the sheets. These sheets all stack together so that the entire connectivity of the brain follows three precisely defined directions."

The directions of the pathways were previously difficult to determine because in embryological life the pathways run in simple directions but become very bent and folded as the brain matures into an adult and more information and skills are learned. The surface of the adult brain appears more folded and the three directions become increasingly curved and thus difficult to view definitively.

"This is the first time it has ever been determined that the geometry of the brain is described by a three-dimensional grid," said Krastan Blagoev, program director in the Mathematical & Physical Sciences Directorate at the National Science Foundation. "We are so pleased with the outcome of this important research and this significant development and look forward to learning even more information regarding the connectivity and pathways of the brain.

"The research took MRI scanners and new mathematical algorithms to determine a geometry to the relationship of nearby pathways in the brain so that each pathway was part of a two-dimensional sheet of pathways that together looked exactly like a woven sheet of fabric," said Van Wedeen.

Each pathway was part of a parallel series next to it crossed by a perpendicular series at a right angle, together which formed a woven grid. The structure was part of a three-dimensional scaffold connections of the brain conformed to the extremely simple three-dimensional structure, a single woven grid with fibers in only three axes.  By using diffusion MRI and mapping the three-dimension motion of the water molecules in the brain, the scientists ran the maps through mathematical algorithms that inferred from the water motion pattern the fiber architecture of the tissue of the brain.

By comparing the human brain with those of primates, the researchers determined clues regarding the aging and other conditions of the human brain. This significant research and discovery opens the doors to a vast array of further opportunities into the inter-working of our most vital organ.