Researchers determine that although glaciers continue to increase in velocity, the rate at which they can dump ice into the ocean is limited 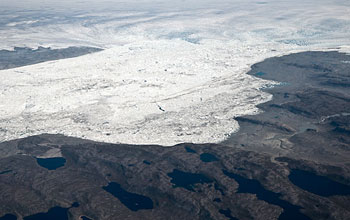 Changes in the speed that ice travels in more than 200 outlet glaciers indicates that Greenland's contribution to rising sea level in the 21st century could be significantly less than the upper limits some scientists thought possible.

The finding comes from a paper funded by the National Science Foundation (NSF) and NASA and published in today's journal Science.

While the study indicates that a melting Greenland's contributions to rising sea levels could be less than expected, researchers concede that more work needs to be done before any definitive trend can be identified.

Studies like this one are designed to examine more closely and in greater detail what is actually happening with the ice sheets, often using newer and more precise tools and thereby better defining the parameters that scientists use to make predictions, such as the upper limits of sea-level rise.

"This study provides more evidence that the rate at which these glaciers can dump ice into the ocean is indeed limited," said Ian Howat, assistant professor of Earth sciences and member of the Byrd Polar Research Center at Ohio State University, a co-author on the paper. "What remains to be seen is how long the acceleration will continue--but it appears that our worst-case scenarios aren't likely."

The fate of the Earth's ice sheets and their potential contributions to sea-level rise as the globe warms are among the major scientific uncertainties cited in the Fourth Assessment of the Intergovernmental Panel on Climate Change (IPCC). This is in part because the Greenland and Antarctic ice sheets have historically been, and in large measure continue to be, relatively sparsely monitored, as compared to other parts of the globe.

The faster the glaciers move, the more ice and melt water they release into the ocean.

In previous studies, scientists trying to understand the contribution of melting ice to rising sea level in a warming world considered a scenario in which the Greenland glaciers would either double or increase by as much as ten-fold their velocity between 2000 and 2010 and then stabilize at the higher speed.

This new study shows Greenland ice would likely move at the lower rate--a doubling of its speed--and contribute about four inches to rising sea level by 2100. The previous studies used the higher speed and estimated the glaciers would contribute nearly 19 inches by the end of this century.

In the new study, the scientists extracted a decade-long record of changes in Greenland outlet glaciers by producing velocity maps using data from the Canadian Space Agency's Radarsat-1 satellite, Germany's TerraSar-X satellite and Japan's Advanced Land Observation Satellite. They started with the winter of 2000-01 and then repeated the process for each winter from 2005-06 through 2010-11 and found that the outlet glaciers had not increased in velocity as much as had been speculated.

"So far, on average we're seeing about a 30 percent speedup in 10 years [of Greenland glaciers, which gives new insight for rising sea level]," said Twila Moon, a University of Washington doctoral student in Earth and space sciences and lead author of the paper documenting the observations.

"This study is a great example of the power of high-resolution data sets in both space and time, and the importance of looking carefully at as much data as possible in helping make the best predictions we can of future changes", said Henrietta Edmonds, program director for Arctic Natural Sciences in NSF's Office of Polar Programs.

The scientists saw no clear indication in the new research that the glaciers will stop gaining speed during the rest of the century, and so by 2100 they could reach or exceed the scenario in which they contribute four inches to sea level rise.

The record showed a complex pattern of behavior. Nearly all of Greenland's largest glaciers that end on land move at top speeds of 30 to 325 feet a year, and their changes in speed are small because they are already moving slowly. Glaciers that terminate in fjord ice shelves move at 1,000 feet to a mile a year, but didn't gain speed appreciably during the decade.

In the East, Southeast and Northwest areas of Greenland, glaciers that end in the ocean can travel seven miles or more in a year. Their changes in speed varied (some even slowed), but on average the speeds increased by 28 percent in the Northwest and 32 percent in the Southeast during the decade.

Moon said she was drawn to the research from a desire to take the large store of data available from the satellites and put it into a usable form to understand what is happening to Greenland's ice. "We don't have a really good handle on it and we need to have that if we're going to understand the effects of climate change," she said.  "We are going to need to continue to look at all of the ice sheet to see how it's changing, and we are going to need to continue to work on some tough details to understand how individual glaciers change."