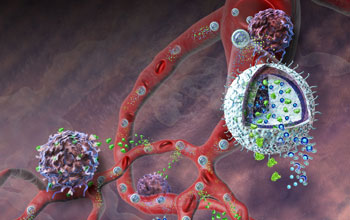 This illustration depicts the nanolipogel administering its immunotherapy cargo.

Cancers are notorious for secreting chemicals that confuse the immune system and thwart biological defenses.

To counter that effect, some cancer treatments try to neutralize the cancer's chemical arsenal and boost a patient's immune response--though attempts to do both at the same time are rarely successful.

Now, researchers have developed a novel system to simultaneously deliver a sustained dose of both an immune-system booster and a chemical to counter the cancer's secretions, resulting in a powerful therapy that, in mice, delayed tumor growth, sent tumors into remission and dramatically increased survival rates.

The researchers, all from Yale University, report their findings in the July 15, 2012, issue of Nature Materials.

The spheres appear to accumulate in the leaky vasculature, or blood vessels, of tumors, releasing their cargo in a controlled, sustained fashion as the spherule walls and scaffolding break down in the bloodstream.

"You can think of the tumor and its microenvironment as a castle and a moat," says Tarek Fahmy, the Yale University engineering professor and NSF CAREER grantee who led the research. "The 'castles' are cancerous tumors, which have evolved a highly intelligent structure--the tumor cells and vasculature. The 'moat' is the cancer's defense system, which includes TGF-β. Our strategy is to 'dry-up' that moat by neutralizing the TGF-β. We do that using the inhibitor that is released from the nanolipogels. The inhibitor effectively stops the tumor's ability to stunt an immune response."

At the same time, the researchers boost the immune response in the region surrounding the tumor by delivering IL-2--a cytokine, which is a protein that tells protective cells that there is a problem--in the same drug delivery vehicle. "The cytokine can be thought of as a way to get reinforcements to cross the dry moat into the castle and signal for more forces to come in," adds Fahmy. In this case, the reinforcements are T-cells, the body's anti-invader 'army.' By accomplishing both treatment goals at once, the body has a greater chance to defeat the cancer.

The current study targeted both primary melanomas and melanomas that have spread to the lung, demonstrating promising results with a cancer that is well-suited to immunotherapy and for which radiation, chemotherapy and surgery tend to prove unsuccessful, particularly when metastatic. The researchers did not evaluate primary lung cancers in this study.

"We chose melanoma because it is the 'poster child' solid tumor for immunotherapy," says co-author Stephen Wrzesinski, now a medical oncologist and scientist at St. Peter's Cancer Center in Albany, N.Y. "One problem with current metastatic melanoma immunotherapies is the difficulty managing autoimmune toxicities when the treatment agents are administered throughout the body. The novel nanolipogel delivery system we used to administer IL-2 and an immune modulator for blocking the cytokine TGF-β will hopefully bypass systemic toxicities while providing support to enable the body to fight off the tumor at the tumor bed itself."

Simply stated, to attack melanoma with some chance of success, both drugs need to be in place at the same location at the same time, and in a safe dosage. The NLGs appear to be able to accomplish the dual treatment with proper targeting and a sustained release that proved safer for the animals undergoing therapy.

Critical to the treatment's success is the ability to package two completely different kinds of molecules--large, water-soluble proteins like IL-2 and tiny, water-phobic molecules like the TGF-β inhibitor-into a single package.

While many NLGs are injected into a patient during treatment, each one is a sophisticated system composed of simple-to-manufacture, yet highly functional, parts. The outer shell of each NLG is made from an FDA-approved, biodegradable, synthetic lipid (a dual-layer, water-phobic molecule such as fats and oils) that the researchers selected because it is safe, degrades in a controlled manner, is sturdy enough to encapsulate a drug-scaffolding complex, and is easy to form into a spherical shell.

Each shell surrounds a matrix made from biocompatible, biodegradable polymers that the engineers had already impregnated with the tiny TGF-β inhibitor molecules. The researchers then soaked those near-complete spheres in a solution containing IL-2, which gets entrapped within the scaffolding, a process called remote loading.

The end result is a nanoscale drug delivery vehicle that appears to fit the narrow parameters necessary for successful treatment. Each NLG is small enough to travel through the bloodstream, yet large enough to get entrapped in leaky cancer blood vessels.

The NLG lipid shells have the strength to carry drugs into the body, yet are degradable so that they can deliver their cargo. And most critically, the spherules are engineered to accommodate a wide range of drug shapes and sizes. Ultimately, such a system could prove powerful not only for melanoma, but for a range of cancers.