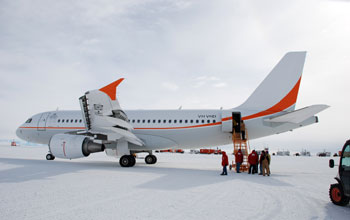 The patient was transported from McMurdo Research Station to a hospital in Christchurch, NZ.

Upon arrival, the patient was transported to a local hospital for treatment.

Due to medical confidentiality, NSF has no additional comment on the patient's status.

NSF decided earlier this week to fly the patient out of Antarctica to receive treatment that is not available at McMurdo. The medical facility at the station is equivalent to an urgent-care center in the United States and is not equipped for the type of procedure that was being contemplated.

Kelly Falkner, the acting director of NSF's Office of Polar Programs, expressed the gratitude of the U.S. Antarctic Program, which NSF manages, to government agencies in Australia and New Zealand that provided the vital assets to make the evacuation possible.

She noted that "this is an excellent example of the benefits of longstanding cooperation with our Antarctic partners, Australia and New Zealand in particular."

The Australian Antarctic Division, which manages Australia's Antarctic research program, provided an A319 Airbus to transport the patient as well as the aircrew and medical support staff aboard the plane. The Royal New Zealand Air Force contributed search-and-rescue coverage, which is integral to any medical evacuation flight at this time of year.

Winter is coming to a close in Antarctica, but daylight is minimal and restricted to midday twilight, and temperatures are extremely low.

An additional passenger was also permitted to leave McMurdo Station aboard the medical evacuation flight because of compelling personal circumstances.

NSF manages the U.S. Antarctic Program, through which it coordinates all U.S. research and the necessary logistical support on the continent and aboard ships in the Southern Ocean.