Study says manufactured nanomaterials may be harmful to agricultural production 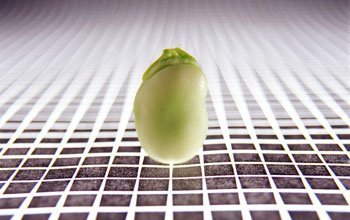 Researchers contend that manufactured nanomaterials--now popular in consumer products such as shampoos, gels, hair dyes and sunscreens--may be detrimental to the quality and yield of food crops, as reported in a paper in the online edition of Proceedings of the National Academy of Sciences.

Manufactured nanomaterials are man-made materials produced by manipulating matter on an atomic and molecular scale. Their effects on human health and the environment are the subject of much scientific study.

"As MNMs are used more and more in consumer products, there is a higher likelihood that they will end up in wastewater treatment facilities," said lead researcher John Priester, an environmental scientist at the Bren School of Environmental Science and Management at University of California, Santa Barbara.

Conventionally-treated wastewater is a primary source of normally nutrient-rich organic materials applied to agricultural soil, and farmers beneficially use this treated water and the biosolids from it as fertilizer. As MNMs become more prevalent, there is concern about MNM buildup in soils and possible MNM entry into the food supply.

Priester and his research team reasoned that no single study had before examined the full implications of environmental buildup of MNMs for a soil-based food crop. The researchers sought to fill the knowledge gap by fully growing soybean plants through the seed production stage in soil amended with high-production nanomaterials.

Most surprising to Priester was the high level of zinc in the leaves and beans of plants exposed to ZnO nanoparticles; the component metal was taken up and distributed throughout edible plant tissues. "Also, the shutdown of nitrogen fixation in root nodules at high CeO2 concentrations," he said, noting that nano-CeO2 diminished plant growth and yield.

"These results indicate broader risks to the food supply," the researchers write in the paper. They go on to say the environment could be affected even more since increased synthetic fertilizer would be required to offset lost nitrogen fixation, a process that soybeans and other legumes use to convert atmospheric nitrogen into natural fertilizer.

"These are very significant findings; they highlight the importance of full life-cycle tracking of manufactured nanomaterials in consideration of environmental impacts," said Alan Tessier, a program director in the National Science Foundation's Biology Directorate. "If the nanomaterials tested in this paper were to move into the biosolids or irrigation system used in agriculture, they could seriously harm agricultural production."

"Completely preventing nanomaterials from entering agricultural soils may be difficult," said Priester. "Nanomaterials may be engineered, however, to minimize impacts once they are released into the environment."

He said designing particles to dissolve very slowly, or coating them with inert compounds, for example, could help prevent detrimental impacts on crop foods.

In the meantime, the researchers are examining the effects of ZnO and CeO2 nanoparticles on other aspects of the soybean, such as the soil system, looking for indicators of plant damage and changes to the microbial community in the soil. They also are studying the speciation of the two nanomaterials within the plant tissue, and how the uptake may have changed micro- and macro-nutrients in soybeans.

In addition to the National Science Foundation, the U.S. Environmental Protection Agency supported the research.