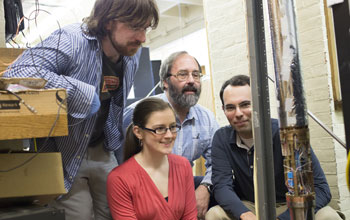 Researchers examine a Penning trap used to measure the magnetic charge of an antiproton.

A scientific collaboration that compares hydrogen atoms with their antimatter equivalents has successfully measured the magnetism of a single antiproton to a precision that is 680 times higher than has been possible with earlier methods.

The improvement, reported today in Physical Review Letters, could help scientists uncover why there's a tremendous imbalance between matter and antimatter in the universe.

"A puzzling question about our universe is why it is dominated by matter and there is hardly any antimatter," said Siu Au Lee, physics program director in the National Science Foundation's Mathematical and Physical Sciences directorate, which funded the research. "One way to find out the reason is to probe possible differences between the properties of particles and antiparticles."

"Being able to measure the antiproton's magnetic charge nearly a thousand times more precisely would allow us to see much smaller differences between the size of the antiproton and proton than previously had been possible," added Gerald Gabrielse, the Leverett Professor of Physics at Harvard University, who led the research team.

To accomplish the task, the Antihydrogen trap research team, or ATRAP Collaboration, suspended a single antiproton within a Penning trap at the CERN particle physics laboratory just outside Geneva, Switzerland. The Penning trap used a magnet and a battery to hold the antiproton in a vacuum and sufficiently distant from any matter wall that would cause it to annihilate.

The higher the radio frequency needed to cause the "spin flips," the stronger the antiproton's internal magnet.

The method allowed researchers to compare the strength of the antiproton's magnetism to a proton's magnetism. According to the Standard Model of particle physics--the most fundamental physics theory--the antiparticle (antiproton) and the particle (proton) should have exactly opposite magnets. They should be the same strength, but point in opposite directions with respect to the particle's spin.

In this case, that's precisely what the researchers found-- the antiproton and proton magnets were "exactly opposite" as predicted, even at the new level of precision.

This is a striking confirmation of one of the more precise predictions of our most fundamental theoretical model, said Gabrielse. "It would have been more fun and given more clues about the universe imbalance if we had observed that the two magnets had had different strengths."

The team believes that the addition of quantum methods will allow even more precise tests in the future.