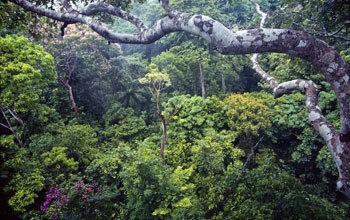 Tropical rainforest on Barro Colorado Island, Panama, near the site of the study.

A unique housing arrangement between a specific tree species and carbo-loading bacteria may determine how well tropical forests can absorb carbon dioxide from the atmosphere, says new research today in an advance online publication of the journal Nature.

The findings suggest that the role of tropical forests in offsetting the atmospheric buildup of carbon from fossil fuels depends on tree diversity, particularly in forests recovering from exploitation.

Tropical forests thrive on natural nitrogen fertilizer pumped into the soil by trees in the legume family, a diverse group of plants that includes beans and peas, the researchers report.

"Fast-growing nitrogen-fixing trees are not common outside of the tropics, but are found in surprisingly high diversity there," said Henry Gholz, program director in the National Science Foundation's (NSF) Division of Environmental Biology, which funded the research.

"These findings place the trees' ability to capture atmospheric nitrogen and to use it to stimulate growth in the context of long-term tropical forest development," Gholz said. "This process not only allows these trees to get out of the gate quickly after a disturbance, but to maintain dominance decades to centuries later."

The researchers studied recovering forests in Panama that had been exploited five to 300 years earlier.

The presence of legume trees ensured rapid forest growth, and thus a substantial carbon sink, in the first 12 years of recovery.

Tracts of land that were pasture only 12 years before had already accumulated as much as 40 percent of the carbon found in fully mature forests. Legumes contributed more than half the nitrogen needed to make that happen.

These fledgling woodlands had the capacity to store 50 metric tons of carbon per hectare, which equates to roughly 185 tons of carbon dioxide, or the exhaust of some 21,285 gallons of gasoline.

That much fuel would take the average car in the United States more than half a million miles.

Though the legumes' nitrogen fertilizer output waned in later years, the species nonetheless took up carbon at rates that were up to 9 times faster than non-legume trees.

The legumes' secret is a process known as "nitrogen fixation" carried out in concert with infectious bacteria known as rhizobia, which dwell in small pods, known as root nodules, inside the tree's roots.

As a nutrient, nitrogen is essential for plant growth, but tropical soil is short on nitrogen and surprisingly non-nutritious for trees.

Legumes use secretions to invite rhizobia living in the soil to infect their roots, and the bacteria signal back to initiate nodule growth.

The rhizobia move into the root cells of the host plant and--in exchange for carbohydrates produced by photosynthesis in the tree--convert nitrogen from the air into fertilizer plants need.

Scientists recently assigned numbers to track how much carbon forests as a whole absorb, suggesting that the world's forests took up 2.4 quadrillion tons of carbon from 1990 to 2007.

"If trees could just grow and store carbon, you could have a rapid sink, but if they don't have enough nitrogen they don't take up carbon," he said, adding that nitrogen-fixing trees are uncommon in temperate forests such as those in most of North America and Europe.

First author Sarah Batterman of Princeton said that legumes, or "nitrogen-fixers," are especially important for forests recovering from agricultural use, logging, fire or other human activities.

The researchers studied 16 forest plots that were formerly pasture and are maintained by the Smithsonian Tropical Research Institute (STRI).

Forest degradation, however, comes with a loss of biodiversity that can affect nitrogen-fixers, too, even though legumes are not specifically threatened, Batterman said.

If the number and diversity of nitrogen-fixers plummet, the health of the surrounding forest would likely be affected for a long time, she said.

"This study shows that there is an important place for nitrogen-fixation in these disturbed areas," Batterman said.

"Nitrogen-fixers are a component of biodiversity and are important for the function of these forests, but we don't know enough about how this valuable group of trees influences forests. While some species may thrive on disturbance, others may be sensitive to human activities."

The researchers found that the nine legume species they studied did not contribute nitrogen to surrounding trees at the same time.

Certain species were more active in the youngest forests, others in middle-aged forests, and still other species went into action mainly in 300-year-old tracts, though not nearly to the same extent as legumes in younger plots.

The researchers found that individual trees reduced their fixation as nitrogen accumulated in soils, with the number of legumes actively "fixing" nitrogen dropping from 71 to 23 percent between 12- and 80-year-old forests.

"The diversity of species present in the forest is critical because it ensures that there can be fixation at different time periods of forest recovery," Batterman said.

"If you were to lose one of those species and it turned out to be essential for a specific time period, fixation might drop dramatically."

Such details can improve what scientists know about future climate change, Batterman said.

Computer models that calculate the global balance of atmospheric carbon dioxide also must factor in sinks that offset carbon, such as tropical forests.

And if forests take up carbon differently depending on the abundance and diversity of legumes, models should reflect that variation, she said.

"Other researchers can now put this role of nitrogen-fixation into their models and improve predictions about the carbon sink," Batterman said.

Batterman and Hedin worked with Michiel van Breugel and Jefferson Hall at STRI, Johannes Ransijn at the University of Copenhagen and Dylan Craven at Yale University.

The work was also supported by grants from the National Oceanic and Atmospheric Administration; the Smithsonian Tropical Research Institute; and the Cooperative Institute for Climate Science and the Carbon Mitigation Initiative, both at Princeton University.