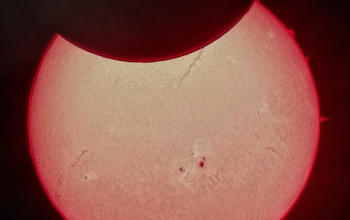 Astronomers with the National Science Foundation (NSF)-funded National Optical Astronomy Observatory (NOAO) captured pictures not only of Thursday's partial solar eclipse, but also of the "monster" sized active region or sun spot that has many comparing it to one of a similar size that occurred 11 years ago.

The sun spots were earlier reported by scientists with the NSF-supported National Solar Observatory. According to astronomers Frank Hill and Kiran Jain, "As of Oct 21, 2014, a very large active region is currently on the solar disk and producing flares as strong as an X1. [Solar flares are classified according to their strength, and X-class flares are the biggest.] It is eerily reminiscent of another very large active region, which appeared almost exactly 11 years ago around Halloween 2003 very close to the same location on the sun and produced an X17 event, the largest solar flare recorded in modern history. That flare was one of a series of very strong flares now known as the Halloween flares. We may be in for an encore. This active region currently covers 2,000 millionths of the solar disk area and is almost the size of Jupiter."

What's the significance of active regions?

When they produce X17 events with solar winds that spew solar matter full of charged particles, they can impact the Earth's ionosphere, the very upper part of our atmosphere. That's where our satellites reside, so extreme solar winds can hamper our communications systems that rely on these satellites, such as GPSs and telecommunications, as well as have impact on power grids. Additionally, the increased solar activity makes that upper atmosphere a little hotter, which causes more wear-and-tear on the satellites. The last Halloween flares actually knocked out power grids in Sweden, so they can be cause for concern here on Earth. The current active region showed up in late September and is likely to stick around for a few weeks, so astronomers are monitoring it closely to see how it grows or changes.

And NOAO's Robert Sparks showed that sometimes all it takes is a phone camera and a telescope to provide photos with amazing detail. In two of the photos, he used cell phones attached to a telescope, providing not only a good look at the sun's active region, but also prominences (large, bright, gaseous features that extend outward from the sun's surface, often in loop shapes) and filaments (large regions of very dense, cool gas, held in place by magnetic fields that appear as dark, long and thin).