Director of NSF-funded Center for Brains, Minds and Machines recognized for his work developing computational models of the human visual system 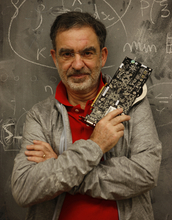 Center researchers explore some of the most critical and fundamental questions in neuroscience.

The Society for Neuroscience (SfN) will award the Swartz Prize for Theoretical and Computational Neuroscience to Tomaso Poggio of the Massachusetts Institute of Technology (MIT).

Poggio is the director of the Center for Brains, Minds and Machines, a MIT-based center funded by the National Science Foundation (NSF) that seeks to advance our understanding of human intelligence by building smarter machines.

The $25,000 prize, supported by The Swartz Foundation, recognizes an individual who has produced a significant cumulative contribution to theoretical models or computational methods in neuroscience. The award will be presented during Neuroscience 2014, SfN's annual meeting and the world's largest source of emerging news about brain science and health.

"Dr. Poggio's contributions to the development of computational and theoretical models of the human visual system have served to advance our understanding of how human systems learn from experience," SfN President Carol Mason said. "It is an honor to recognize him as a founder and driving force in the field of computational neuroscience."

For decades, Poggio has worked to create computational models of how the brain functions. Specifically, he has developed models that mimic the ways that humans learn to recognize objects such as faces, and actions such as motion--applications now present in digital cameras and some cars.

Poggio is currently working to develop more complex models that mimic the signals that the human brain uses during visual recognition, with the ultimate goal of better understanding how the brain works and applying this technology to build intelligent machines.

In 2013, NSF awarded $25 million to establish the Center for Brains, Minds and Machines through NSF's Science and Technology Centers: Integrative Partnerships program. The five-year award enables the center's researchers to benefit from the expertise of neuroscientists, engineers, mathematicians and computational scientists through a global network of academic, industrial and technological partnerships. The award also helps train the next generation of scientists and engineers.

The MIT-based center is a key component in NSF's role in the BRAIN Initiative, an effort by federal agencies and private partners to support and coordinate research to understand how the brain works.

"Dr. Poggio's research tackles some of the most critical and fundamental questions in neuroscience," said Suzi Iacono, acting assistant director for Computer & Information Science & Engineering at NSF. "His leadership at the Center for Brains, Minds and Machines has already led to many important developments and exemplifies the multi-disciplinary research that will move the field forward."

Poggio earned his Ph.D. at the University of Genoa in Italy and worked at the Max Planck Institute for Biological Cybernetics in Tübingen, Germany, until joining the faculty at MIT. There, he is the Eugene McDermott professor in the Department of Brain and Cognitive Sciences and co-director of the Center for Biological and Computational Learning.