Awards honor top scholars and innovators, nearly all of whom received NSF support during their careers 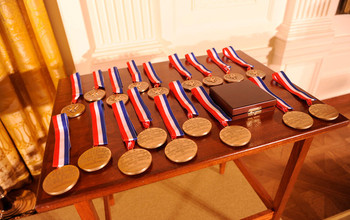 At a White House ceremony last Thursday, President Obama presented the National Medal of Science and National Medal of Technology and Innovation to individuals who have made outstanding contributions to science and engineering. The awards are the nation's highest honors for achievement and leadership in advancing the fields of science and technology.

"The story of these trailblazers reflects our bigger American story of constant transformation," President Obama said. "They represent the spirit that has always defined the American people, one of restless searching for the right solution to any problem; an inclination to dream big dreams; and an insistence on making those dreams come true."

Administered for the White House by the National Science Foundation (NSF), the National Medal of Science was established by the 86th Congress in 1959 as a presidential award to be given to individuals "deserving of special recognition by reason of their outstanding contributions to knowledge in the physical, biological, mathematical or engineering sciences." In 1980 Congress expanded this recognition to include the social and behavioral sciences.

The National Medal of Technology and Innovation was created by statute in 1980 and is administered for the White House by the U.S. Department of Commerce's Patent and Trademark Office. The award recognizes those who have made lasting contributions to America's competitiveness and quality of life and helped strengthen the nation's technological workforce.

Awarded annually, the Medal honors the Nation's visionary thinkers whose creativity and intellect have made a lasting impact on the United States and its workforce. The President receives nominations from a committee of presidential appointees based on their extraordinary knowledge of chemistry, engineering, computing, mathematics, and the biological, behavioral/social, and physical sciences.