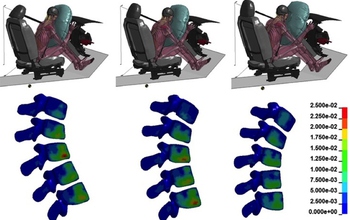 More than 33,000 Americans die in motor vehicle crashes annually, according to the Centers for Disease Control and Prevention. Modern restraint systems save lives, but some deaths and injuries remain--and restraints themselves can cause some injuries.

"Crash-test dummies" help engineers design safer cars, but provide only limited information about forces the body experiences during impact. Computer models of vehicle crashes, on the other hand, provide more sophisticated information on how to improve restraints and other safety systems. The models also help researchers simulate the effects of thousands of variables that would be far too slow to test in physical crash tests.

"There's really limited information you can get from a crash-test dummy--you get only about 20 data points," says Ashley A. Weaver, an assistant professor at the Virginia Tech-Wake Forest University Center for Injury Biomechanics and a former National Science Foundation (NSF) graduate research fellow. "The human body model gives us much more, predicting injuries in organs that aren't in that dummy, such as lung contusions."

The Crash Injury Research and Engineering Network (CIREN) has created a database of real-world vehicle crashes for researchers to test with computer models. Working with Joel Stitzel and graduate students and staff from the Center for Injury Biomechanics, Weaver used the NSF-supported Blacklight supercomputer at the Pittsburgh Supercomputing Center and the DEAC Cluster at Wake Forest University, to run thousands of simulations drawn from hundreds of cases. The simulations used virtual versions of the Toyota Camry and Chevrolet Cobalt.

Weaver worked with members of the Extreme Science and Engineering Discovery Environment (XSEDE) Extended Collaborative Support Service team--staff with expertise in many areas of advanced computing--who helped set up the cyberinfrastructure and workflows needed to run the simulations.

Supported by a five-year, $121 million NSF grant, XSEDE provides a collection of integrated digital resources that scientists can use to access advanced computing resources, data and expertise.

Along the way, they demonstrated how injury-causing stress moves from the foot to the lower leg as a driver's head comes forward into a frontal airbag, and that more reclined seating positions can lead to a higher risk of head and chest injuries.

Weaver and her colleagues published their findings in Traffic Injury Prevention in October 2015.

The simulations allowed the researchers to quantify the sensitivity and uncertainty of the injury risk predictions based on occupant position, which is difficult to determine in real-world motor vehicle crashes.

"By studying a variety of potential occupant positions," the team concluded, "we can understand important factors that lead to more severe injuries and potentially mitigate these injuries with advanced safety systems to protect occupants in more dangerous positions."