Federal research funding up in FY 2015

But total R&D funding falls by 1% 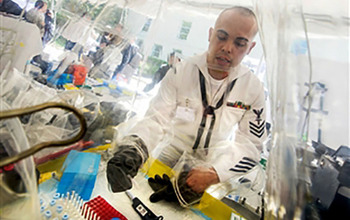 Federal funding for research and development (R&D) and R&D plant (facilities and fixed equipment) totaled $131.4 billion in Fiscal Year (FY) 2015, a 1 percent decrease from the previous year, according to a new report from the National Center for Science and Engineering Statistics (NCSES).

NCSES reported that within the R&D total, research obligations -- a category of transactions including orders placed, contracts awarded and services received -- increased by 1 percent to $63.6 billion. At the same time, development funding fell by 4 percent to $64.9 billion and R&D plant rose a substantial 27 percent to $2.8 billion.

The NCSES report breaks down research funding amounts for the top federal agencies, including:

For more information, including the top 10 state or location recipients for federal R&D funding, read the full report.