Colwell served as 11th director of the National Science Foundation 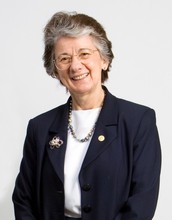 The National Science Board (NSB) is pleased to announce that Rita Rossi Colwell, distinguished university professor at the University of Maryland College Park and at the Johns Hopkins University Bloomberg School of Public Health, senior advisor and chairman emeritus at Canon U.S. Life Sciences, Inc., and founder and chairman at CosmosID, Inc., will receive the 2017 Vannevar Bush Award.

The Vannevar Bush Award honors truly exceptional lifelong leaders in science and technology who have made substantial contributions to the welfare of the nation through public service activities in science, technology, and public policy. Colwell, whose work bridges many areas, including microbiology, ecology, infectious disease, public health, and computer and satellite technology, is recognized for her significant, life-saving contributions in the areas of global infectious diseases, water, and health.

"Rita Colwell's leadership and contributions to science and humanity are extraordinary. She made numerous scientific advances and revolutionary discoveries that have been translated into preventing countless of people from suffering with cholera," said Vicki Chandler, chair of the NSB's Committee on Honorary Awards. "Rita is a positive role model, both in her passion for her work, her amazing record of service to science nationally and worldwide and in her resolve to succeed and make a difference in spite of barriers. The National Science Board is proud to bestow her with this award."

Colwell's passion for science was obvious at an early age. As a sixth-grader, her school principal said to her, "You received the highest science test score ever. You have a responsibility to meet your potential and you must go to college." But this was in the 1940s, and discrimination against women, especially in the sciences, was an obstacle. Hurdles she faced included a high school science teacher who told her not to bother with chemistry in college, as it was not a career suitable for women, and a department chair who denied her a master's degree fellowship because they were "wasted on women." Colwell's steely determination to succeed was apparent, then and now.

Her decision to pursue a career in genetics introduced her to the emerging field of molecular biology and the very earliest use of computers in the pursuit of understanding complex biological systems. In the 1960s, Colwell was the first researcher in the U.S. to develop a computer program to analyze bacteriological data. Today, bioinformatics is used at the very forefront of biological scientific research due to her efforts, along with colleagues, to promote the use of computing tools to facilitate the study of biology.

Colwell's lifelong passion for studying environmental microbiology, especially in marine environments, was fostered by her childhood fascination with the ocean. This passion led to her discovery, in the 1970s, of the presence of Vibrio cholerae, the causative agent of cholera, in the waters of Chesapeake Bay. At the time, conventional wisdom held that cholera was spread from person to person, or from consuming tainted food or drinking water and that its presence in the environment could only be due to the release of sewage into rivers, lakes, streams, and other waters. She proved that the bacteria were native to the aquatic environment, attached to zooplankton, and that certain bacteria, such as Vibrio species, are capable of entering a dormant state.

The last cholera epidemic in Central and South America in the 1990s brought this disease and Colwell's work onto the world stage. Colwell advised numerous governments and groups during this epidemic; her extensive knowledge of the organism, public health, genetics, and ecology was used to combat the disease and save numerous lives. She assisted Ecuador to address this epidemic by providing rapid identification of V. cholerae in the hospitals and in the shrimp industry, the latter being a major portion of Ecuador's gross national product at the time. Similarly, she worked with IMARPE in Peru, playing a role in the development of drinking water criteria that helped guide policies to curb spread of the disease.

Today, bacterial zoonosis is a well-established and increasingly important field of study. Colwell's interdisciplinary work paved the way for researchers from ecological disciplines and epidemiological disciplines to cross over into each other's area of study, leading to a better understanding of disease transmission and ways to approach its control.

"It is a great honor for me to be the recipient of the 2017 Vannevar Bush Award. It is extraordinarily humbling when one looks at the remarkable people who have received this award in the past," Colwell said. "This is a challenging time for science and a difficult one for those scientists, engineers and technologists who are pursuing discovery and creativity driven research. Dr. Bush can be considered the father of the research enterprise of our country. It is especially gratifying to me to be honored for research and educational accomplishments as that would be the very spirit of Vannevar Bush and his hope for the future as he saw it. As a woman I am proud to be a scientist and contributing as part of the entire talent pool that allows the U.S. to continue to excel."

Colwell has received numerous awards and recognitions, including 55 honorary degrees from institutions of higher education and is the recipient of the Order of the Rising Sun, Gold and Silver Star, bestowed by the Emperor of Japan, 2006 National Medal of Science awarded by the President of the United States, and 2010 Stockholm Water Prize awarded by the King of Sweden. A geological site in Antarctica, Colwell Massif, has been named in recognition of her work in the Polar Regions.

The NSB will present Colwell with the Vannevar Bush Award on May 9th during the National Science Foundation Annual Awards Ceremony held in Washington, D.C.

The Board established the award in 1980 in memory of Vannevar Bush, who served as a science advisor to President Franklin Roosevelt during World War II, helped to establish federal funding for science and engineering as a national priority during peacetime, and was behind the creation of the National Science Foundation. Past award recipients include: Norman Augustine (Lockheed Martin), James Duderstadt (University of Michigan), Leon Lederman (Fermilab), Shirley Ann Jackson (Rensselaer Polytechnic Institute), David Packard (Hewlett-Packard Company), and most recently Robert Birgeneau (University of California, Berkeley).

Jointly, the National Science Board and the National Science Foundation (NSF) Director -- the ex-officio 25th member -- pursue the goals and function of the Foundation. NSB establishes NSF policies within the framework of applicable national policies set forth by the President and Congress. NSB identifies issues critical to NSF's future, approves the agency's strategic budget directions and the annual budget submission to the Office of Management and Budget, and new major programs and awards. The NSB also provides the President and Congress with a biennial report on U.S. progress in science and technology, providing comparisons to other nations in the areas of research and development, STEM education, and workforce training.