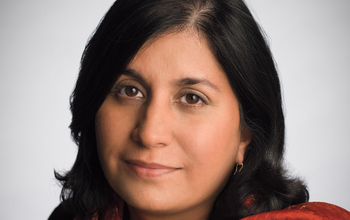 Today the National Science Board (NSB) announced that entrepreneur Maya Ajmera is a recipient of its 2020 Public Service Award. Ajmera is President and CEO of the Society for Science & the Public and Publisher of Science News.

NSB grants its Public Service Award to individuals and groups that have contributed substantially to increasing public understanding of science and engineering. NSB is recognizing Ajmera for inspiring generations of young people to be science and technology leaders and innovators through the Society for Science & the Public, a non-profit organization best known for its world class science research competitions, award winning science journalism, and expansive outreach and equity programs.

Under her leadership as publisher, the Society was able to save its flagship magazine, Science News, an independent source of science expanding journalism since 1921. Ajmera achieved this by creating a new education pillar for the magazine, access of Science News to 5,000 high schools across the country.

Ajmera has helped to strengthen the nearly 100-year-old organization, by reinvigorating the Society’s science research competitions. She spearheaded a $100 million-dollar sponsorship with Regeneron, a biotechnology company, for the Science Talent Search competition. She has also fostered greater participation and more sponsorship from several industrial leaders in the Broadcom MASTERS competition and the Regeneron International Science and Engineering Fair. Through her leadership the Society is also investing $11 million in STEM outreach and equity programming, with a goal of ensuring that every young person has a chance to become scientifically literate and pursue a career as a scientist or engineer if that is what they want to do.

“With education across the country being disrupted by COVID-19 and inequalities being further exacerbated, students from every background deserve access to quality science education, encouragement to explore through project based learning and be recognized for their research and innovations,” said Ajmera. “I am honored to receive this award, following in the footsteps of previous awardees Alan Alda, Ira Flatow, Jane Goodall and Oliver Sacks.”

Ajmera has demonstrated a commitment to social justice and a determination to find ways to fund social innovation. At age 22 she encountered a school being run on a train platform in India and was inspired to found and lead for 18 years the Global Fund for Children, a nonprofit organization that invests in innovative, community-based organizations working with vulnerable children and youth. With nearly $50 million dollars invested in bold ideas around the world, the fund has built one of the largest networks of grassroots organizations serving vulnerable young people.

“The National Science Board is pleased to recognize the contributions of a social entrepreneur,” said Victor McCrary, Vice Chair of the National Science Board and Chair of the 2020 NSB Honorary Awards Subcommittee. “Ajmera’s work shows that public service comes from many sectors. And her indefatigable creativity and ingenuity show that you can serve the community through a very successful business model.”

The NSB is not the only entity to recognize Ajmera. She has received numerous awards throughout her career, including the Aspen Institute’s Henry Crown Fellowship and the Katharine Hepburn Fellowship from her alma mater, Bryn Mawr College. She has also served on numerous boards known nationally for social innovation.

The NSB announced its other 2020 Public Service Award winner, Richard Ladner, earlier this year and will be announcing the winner of its Vannever Bush Award later this month.

The NSB and NSF’s Director jointly head the agency. The Board identifies issues critical to NSF's future and establishes its policies. The NSB also provides the President and Congress with Science and Engineering Indicators, a biennial report on U.S. progress in science and technology. Members are appointed by the President for six-year terms and are selected for their eminence in research, education and records of distinguished service.