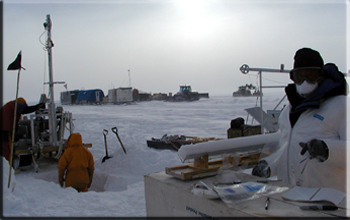 In December the international Scientific Committee on Antarctic Research (SCAR) released Antarctic Climate Change and the Environment, the first comprehensive report on the crrent state of Antarctica's climate and its relationship to global climate.  The report, which pulls the latest research from 100 scientists in eight countries, identifies areas for future scientific research and addresses the urgent questions that policy makers have about Antarctic melting, sea-level rise, and biodiversity.

Two NSF/OPP grantees, Paul Mayewski and Robert Bindschadler, participated as editors of the report.  The key message from the report, according to Bindschadler, is that "the ice is changing. The ice sheet is changing faster than we ever expected to witness ice sheets changing in our lifetimes, quite honestly."

Read more about the report in the Antarctic Sun, the U.S. Antarctic Program's online magazine. . . .