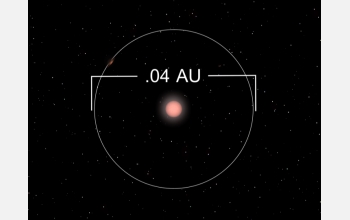 This animation shows the newly discovered planet and its two larger siblings as they orbit the M dwarf star Gliese 876. The star and the orbits are to scale; the planet sizes are exaggerated. In addition, the orbits are shown inclined at an angle of 50 degrees, which is how they appear in our sky.

The new planet has about twice the radius of the Earth and about seven-and-a-half times its mass, and orbits the star once every two days.