Streaming video of a flythrough animation of the Gliese 876 system 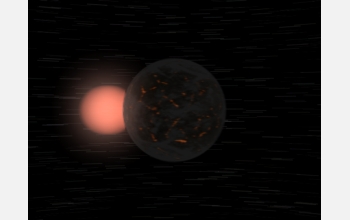 This animation takes us on a flythrough of the Gliese 876 system. The star, the orbits and the sizes of all three known planets are to scale.

Finally we come to the newly discovered planet. It has about twice the radius of the Earth and about seven-and-a-half times its mass, and it orbits the star once every two days.