Visibility Analysis--Changing Visibility Ranges Through Navigation in a Center's Workspace 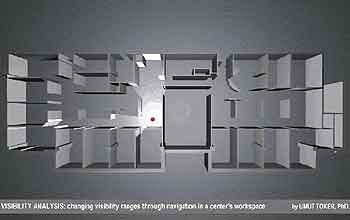 In his PhD dissertation at the North Carolina State University School of Design, Umut Toker has shown that the level of innovation in a research center is heavily influenced by physical factors such as sight lines. The easier it is for people to see each other as they move around the building, the more chance encounters they will have. The more often they encounter one another, the more often they will engage in impromptu technical discussions. And the more often they communicate, the faster they will come up with new ideas. This short video clip illustrates an analytical tool that Toker developed to highlight how a researcher's sight lines change as he or she moves around in a proposed research center.