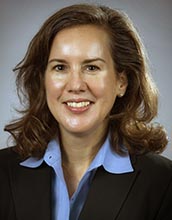 
Allison C. Lerner assumed the duties as Inspector General of the National Science Foundation (NSF) in April 2009, reporting to the National Science Board and the Congress. As head of the Office of Inspector General she recommends policies for promoting economy, efficiency and effectiveness of NSF programs and operations. She leads efforts to prevent and detect fraud, waste, and abuse; improve the integrity of NSF programs and operations; and investigate allegations of misconduct in science.

Ms. Lerner was appointed in November 2005 as Counsel to the Inspector General at the Department of Commerce, a position through which she acted as the IG's principal legal advisor and managed the office's staff attorneys and provision of legal services.

In June of 2011, Ms. Lerner was designated by President Obama as a member of the Government Accountability and Transparency Board. She currently serves as the Vice Chair of the Council of the Inspectors General on Integrity and Efficiency and co-chairs the Council's Working Groups on Suspension and Debarment and Research Misconduct.

Ms. Lerner has been honored by the President's Council on Integrity and Efficiency (PCIE) with three awards for excellence: in 2001, for her work reviewing the Department of Commerce's management of 5,000 intra-agency and special agreements worth over $1 billion; in 2002, for her assistance in a complex investigation of false claims submitted under a financial award from the National Institute of Standards and Technology; and in 2005, for her review of a controversial study that recommended significant structural changes to the National Oceanic and Atmospheric Administration's Office of Finance and Administrative Services.