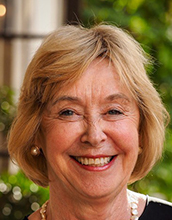 
Born in Scotland, Anneila I. Sargent earned her B.Sc. in Physics at the University of Edinburgh and her Ph.D. from the California Institute of Technology (Caltech). She has spent her career at Caltech and was Benjamin M. Rosen Professor of Astronomy from 2004 until 2013 when she was named Ira S. Bowen Professor of Astronomy. From 2007-2016, she served as Caltech's Vice President for Student Affairs. Sargent's research has concentrated largely on understanding how stars and other planetary systems form and evolve and relies on observations at radio, millimeter, and infrared wavelengths. She was Director of Caltech's Owens Valley Radio Observatory (OVRO) from 1996 until 2007. In that role, she led the Caltech effort to construct the Combined Array for Millimeter-wave Astronomy (CARMA) which combined the OVRO millimeter-wave telescopes with those of the Berkeley-Illinois-Maryland Association array, and was CARMA Director from 2003-to-2007. Between 2000 and 2003, Sargent was Director of the Michelson Science Center at Caltech, the data center planned for the Keck/NASA interferometer on Mauna Kea, Hawaii. She chaired the international Board of Atacama Large Millimeter Array (ALMA) from 2006-to-2007 and from 2009-to-2011. She was President of the American Astronomical Society from 2000-to-2002, and is a fellow of the American Academy of Arts and Sciences. Between 2003 and 2008, Sargent was Vice Chair and then Chair of the National Research Council (NRC) Board of Physics and Astronomy. From 1994-to-1998, she was chair of NASA's Space Science Advisory Committee and in 1998 was awarded NASA's Distinguished Service Medal. Sargent has also served on the National Science Foundation's Mathematical and Physical Sciences Advisory Committee, the 2000 NRC Survey Committee on Astronomy and Astrophysics ("Astronomy and Astrophysics in the New Millennium"), and of the NRC Committee on the Organization and Management of Astronomy and Astrophysics. The University of Edinburgh recognized Sargent as Alumna of the Year in 2002, and awarded her the degree of D.Sc. (honoris causa) in 2008. She was named Jan H. Oort Professor at the University of Leiden for 2005 and made an Associate of the Royal Astronomical Society in 2003. Dr. Sargent was reappointed to the Board in August 2016.