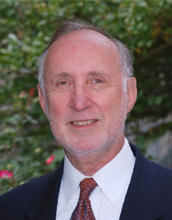 Dr. Goldberg came to the National Science Foundation in 1985, where he currently is Senior Engineering Advisor in the Division of Electrical, Communications and Cyber Systems, Directorate for Engineering. He served previously as Division Director, and earlier as Program Director in areas of quantum electronics, optics, plasmas, and electromagnetics. In the summer of 1989, he served as Acting Head of the NSF Office in Tokyo, Japan. In 1995, he was appointed by the President's Science Advisor to the interagency management committee for the U.S.-Japan Joint Optoelectronics Project. He served in 2005 as U.S. Embassy Science Fellow in Chisinau, Moldova, where he worked in close cooperation in an advisory role with the President of the Academy of Sciences of Moldova. He has since participated in U.S. government-level science studies in Ukraine, Kazakhstan, and Romania.

At NSF, Dr. Goldberg provided oversight for the National Nanotechnology Infrastructure Network (NNIN). He currently is lead program officer and guided the competition for the newly established National Nanotechnology Coordinated Infrastructure (NNCI), as successor to the NNIN. He has coordinated joint activities on nanoelectronics with the Semiconductor Research Corporation, conducted under NSF's emphasis area on Nanoscale Science and Engineering. He led federal agency funding for the 2012 National Academies study on Optics and Photonics: Essential Technologies for Our Nation. He serves as NSF member of the interagency Wireless Spectrum Research and Development Senior Steering Group, and represents the Engineering Directorate on the NSF program Enhancing Access to the Radio Spectrum (EARS). He also coordinates the Major Research Instrumentation (MRI) program for the Engineering Directorate.