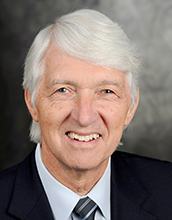 
Roger Beachy is Professor Emeritus in the Department of Biology at Washington University in St. Louis and former Executive Director of the World Food Center at the University of California, Davis. A plant biologist, his research has focused on plant viruses, gene expression, and applications in agricultural biotechnology, leading to more than 260 journal publications. Beachy is committed to strong multi- and trans-disciplinary research collaborations to increase the impacts of scientific research. He has long been engaged in student training and technology advancement to bring benefits to agriculture in developing economies as well as in the United States.

He joined the University of California, Davis in 2014 as the Founding Executive Director of the World Food Center. Beachy was Founding Executive Director and CEO of the Global Institute for Food Security at the University of Saskatchewan, Canada in 2013, and is Emeritus Professor of Biology at Washington University in St. Louis, first joining the faculty in 1978. In 2009, President Obama appointed Beachy as the first director of the U.S. Department of Agricultures National Institute of Food and Agriculture, where he served until 2011. Beachy was Scripps Family Chair in Cell Biology at The Scripps Research Institute from 1991-1999 and President of the Donald Danforth Plant Science Center 1999-2009.

Born in Plain City, Ohio, Beachy received his B.A. in Education from Goshen College in 1966 and Ph.D. in Plant Pathology from Michigan State University in 1973.

He was appointed to the National Science Board in 2014.