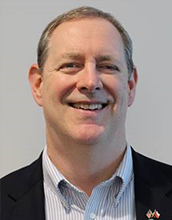 
Chris Smith joined the NSF as the MPS Senior Advisor for Facilities in 2018, providing high-level oversight and coordination for all of the facilities in the MPS portfolio, including the extensive range of astronomical facilities worldwide, physics laboratories such as LIGO and NSF's investments in ATLAS and CMS at CERN, and materials research and chemistry facilities such as the National High Magnetic Field Laboratory and ChemMatCARS.

Prior to joining NSF, Dr. Smith served as Head of Mission of the AURA Observatory in Chile from 2009 to 2018.  In this position, he provided oversight and coordination of the Chilean operations of all of the telescopes acting under the auspices of AURA in Chile, including NSF's Cerro Tololo Inter-American Observatory (CTIO), the Gemini-South telescope, the Southern Astronomical Research telescope (SOAR), and other smaller projects, as well as the development and construction of Large Synoptic Survey Telescope (LSST).  As Head of Mission for AURA, Smith served as primary diplomatic liaison between the observatory and the Chilean government and academic communities, working with them and the U.S. Embassy in Chile to strengthen the mutually beneficial relationships.  From 2008 through 2012, he also held the position of Director of CTIO, the southern-hemisphere branch of NSF's National Optical Astronomy Observatory, and was responsible for the day-to-day operations of both the CTIO telescopes and the site infrastructure supporting all of the telescopes on the AURA site.

As a tenured astronomer at AURA, Dr. Smith's research interests focused on supernovae, supernova remnants, and the physics of the interstellar medium, and include the use of supernovae in cosmological studies.  He was a member of the High-z Supernova team that first published the discovery of the accelerating universe, an accomplishment that was recognized with the 2011 Nobel Prize in Physics.  Smith continued his studies in supernovae and wide-field imaging surveys as a member of the Dark Energy Survey (DES) project and supporting the associated 570-megapixel Dark Energy Camera on the CTIO Blanco 4m telescope.  He was also involved in the initial planning and development of the LSST, an 8.4m-diameter telescope with a 3.2 gigapixel camera currently under construction in northern Chile that will survey the whole accessible sky every 3-4 nights, creating a vast astronomical dataset for unprecedented discovery of the deep and dynamic universe.

Smith received his Bachelors degree in astronomy from Indiana University and his Ph.D. from Harvard University.  After graduation, he was a postdoctoral fellow at CTIO and then held the McLaughlin Postdoctoral Fellow at the University of Michigan until joining the CTIO staff in 1998.