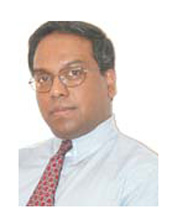 
Sankar Basu is a permanent member of NSF scientific staff and is a program Director. He came to NSF from the IBM T. J. Watson Research Center at the beginning of fiscal year 2003. After receiving a PhD from the University of Pittsburgh he served on the faculty of Stevens Institute of Technology, where he taught and conducted funded research (Air-Force, NSF), and for a brief period was with the Naval Underwater Systems Center, CT as a visiting senior scientist. He has visited the Ruhr University, Bochum, Germany as an Alexander von Humboldt fellow, and the MIT Laboratory for Information and Decision Systems (LIDS) for extended periods. During the summer of 2012 he was a science advisor to the US Embassy in Berlin, Germany as a State Department Embassy Science Fellow.

At NSF his primary responsibilities include Design automation for Micro and Nano-systems, which includes  nano-computing architectures,  VLSI CAD, Cyber Physical Systems (CPS) etc. In addition, he participates in interdisciplinary NSF program on the National Nanotechnology Initiative (NNI), and in the past has participated in the Interactions between Mathematics and Computer Science (MCS), Science of Learning Centers (SLC) Program and the Information Technology Research (ITR) program. In this latter capacity, he was also involved in projects related to machine learning and pattern analysis. He served on the National Science and Technology (NSTC) Committee, Office of Science and Technology Policy (OSTP) on Biometrics. He played leading role in organizing the NSF/SRC cross-agency joint initiatives on the "Multicore Chip Design & Architecture" during Fiscal year 2009, the "Failure Resistant Systems" during the Fiscal year 2012, and  the  "Energy Efficicient Computing: from Devices to Architectures (E2CDA)"  during the Fiscal year 2016-17.

Dr. Basu's past research interests had been in the analytical aspects circuits, systems and signal processing. At IBM, he  worked on statistical machine learning, speech and multimedia data retrieval, and has extensively published on filter synthesis, image processing, nonlinear modeling techniques. An author/coauthor of over one hundred refereed publications including two special volumes on wavelets and filter banks, he was keynote speakers at the First International Workshop on n-D systems (NDS) 1998 in Lagow, Poland as well as at NDS2000 on Czocha Castle, Poland. He holds 10 US Patents.

He was the Editor-in-Chief (EIC) for IEEE Transactions on Circuits and Systems (TCAS)-Part I: Regular Papers during 2006-2007 and was the EIC for the TCAS-part II: Express Briefs during 2004-2005. He has served in editorial capacities for a number of publications including the IEEE Transactions on Multimedia, the Journal of Applied Signal Processing of the European Association of Signal Processing, and the Journal of VLSI Signal and Image Processing published by the Kluwer Academic Publishers. He also served on the Editorial Board of IEEE Press during 2007-2010. At present, he  serves on the editorial board of the Journal of Multidimensional Systems and Signal Processing published by Springer, and Proceedings of the IEEE.

Dr. Basu has organized, chaired sessions, and has been a panelist in many conferences in the areas of nanocomputing, circuits and systems, statistical learning theory. He initiated and was the general chair of the first IEEE International Conference on Multimedia & Expo (ICME) in 2000, for which he also served as the steering committee chair for several years. He was a co-organizer for the NATO Advanced Study Institute on Statistical Learning and Applications at the Katholieke University, Leuven, Belgium in 2002, and co-edited the book Advances in Learning Theory: Methods, Models, and Applications.

In 2001, he was elected a Fellow of the Institute of Electrical  and Electronic Engineers (IEEE) for his contributions to the 'theory and application of multidimensional circuits, systems and signal processing'. He is also an elected Fellow of the American Association for the Advancement of Science (AAAS) for contributions to 'fundamental techniques in circuits and systems theory and their applications in computational science and engineering including processing of multi-dimensional and statistical data'. In 2011 the Semiconductor Research Corporation (SRC) recognized him with an award for Enhancing the Mission of SRC and NSF through Collaboration.