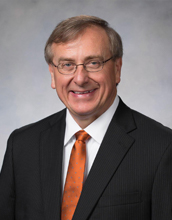 
Dr. Kent Fuchs became the 12th President of the University of Florida (UF) in January 2015. Under President Fuchs leadership, the university has developed shared goals for the decade ahead. UFs overarching aspiration is to be a premier comprehensive research university that the state, nation and world look to for leadership. Previous to the UF presidency, Fuchs was provost of Cornell University, where he also served as Cornells Joseph Silbert Dean of Engineering. He joined Cornell from Purdue University, where he headed the School of Electrical and Computer Engineering and was the Michael J. and Katherine R. Birck Distinguished Professor. He started his academic career at the University of Illinois where he was a professor in the Department of Electrical and Computer Engineering and the Coordinated Science Laboratory. He is a fellow of the American Academy of Arts and Sciences, the American Association for the Advancement of Science (AAAS), the Institute of Electrical and Electronics Engineers (IEEE), and the Association for Computing Machinery (ACM), and has received numerous awards for teaching and research. Fuchs earned his doctorate in electrical and computer engineering from the University of Illinois, and a Master of Divinity degree from Trinity Evangelical Divinity School. He also holds a Bachelor of Science degree in engineering from Duke University. He is married to Linda Moskeland Fuchs, an art historian whose scholarship centers on the sculpture of sarcophagi created in the first centuries of Christian art-making. The Fuchses have three sons and a daughter, Micah, Eric, Isaac and Christine, as well as a daughter-in-law, son-in-law, and two grandsons. Fuchs is a member of the National Science Boards Class of 2016  2022.