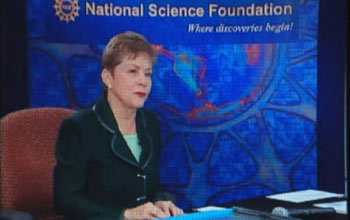 For many years, the shortage of Braille teachers in the United States has created challenges for blind students of all ages who wish to read the ubiquitous system of raised-dot text.

In the 1990s, with support from the National Science Foundation (NSF), renowned educator and innovator for the blind, Sally Mangold of Exceptional Teaching, Inc., developed the Speech Assisted Learning (SAL) device to counter the shortage. The device broke new ground by providing mathematics and Braille reading lessons, in both English and Spanish, in a flat, notebook-sized tool.

Mangold passed away almost exactly one year ago, but her friends and colleagues have recently come together to ensure that her work continues.

"No matter how wonderful speech is, it is not a substitute for human literacy," said Sara Nerlove, the NSF officer who oversaw the SAL awards. "It was Sally Mangold's dream to open doors for Braille learners wanting to explore fields of science, mathematics and engineering."

The SAL system presented, in a Braille format, the same mathematical concepts and problems that appear in regular print books. Students could run their fingers across Braille text with the confidence that an encounter with unknown words or numbers could be easily remedied with a single press on the paper, a trigger for a pronunciation from SAL. With a second press, SAL would spell the word or describe the mathematical symbol.

The original SAL device was a major breakthrough, yet due in part to the cost of the stand-alone hardware, the system did not reach as many students as its developers had hoped.

With some early introductions from Nerlove, Helene Holman of Exceptional Teaching, Inc. and Steven Landau of Touch Graphics, Inc. teamed together to re-introduce the technology. Said Nerlove, "It is the greatest possible tribute to the memory of someone who devoted her life to the education of the blind."

Now, through a collaboration between the two NSF Small Business Innovation Research awardees, SAL is re-emerging as SAL2, a component of the Talking Tactile Tablet (TTT).

"By combining accessible curricula, games and reference materials in a unified platform," said Landau, "we hope to open up new opportunities for learning, job-readiness and entertainment for people whose preferred way to learn is through tactile and auditory channels."

The changes have brought Mangold's lessons to a much wider audience and at less than one-eighth of the original cost. The SAL2 system takes advantage of more flexible and more powerful software and components, but uses lessons based on the same instructional methods debuted on the original machine.

"By merging SAL with the TTT system to create SAL2, we have significantly strengthened both products," said Holman. "Now, kids and adults will be able to work independently or with a teacher using Sally Mangold's proven methods and then take time out to brush up on geography or even solve some crossword puzzles."