Stanford study shows how to improve production at wind farms 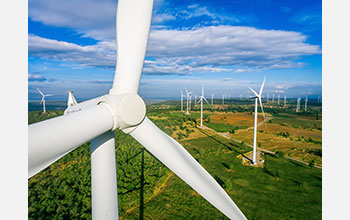 On wind farms, angling turbines slightly away from the wind can boost energy production.

Solitary wind turbines produce the most power when pointing directly into the wind. But when tightly packed lines of turbines face the wind on wind farms, wakes from upstream generators can interfere with those downstream. The wake from a wind turbine can reduce the efficiency of downwind generators by more than 40%.

Now, a new study led by an NSF Graduate Research Fellow at Stanford University and published in the Proceedings of the National Academy of Sciences, found that pointing turbines slightly away from oncoming wind -- called wake-steering -- can reduce interference and improve both the quantity and quality of power from wind farms, and probably lower operating costs.

Computer simulations have shown that angling turbines away from prevailing winds could raise production of downstream turbines. Stanford researchers developed a faster way to calculate the optimal misalignment angles and tested their calculations on a wind farm.

The results showed that the overall power output of the farm increased by up to 47% in low wind speeds -- depending on the angle of the turbines -- and by 7 to 13% in average wind speeds. Wake steering also reduced the ebbs and flows of power that are normally a challenge with wind power.

"Through wake steering, the front turbine produced less power as we expected," said Michael Howland, lead author on the study and a mechanical engineering doctoral student at Stanford. "But we found that because of decreased wake effects, the downstream turbines generated significantly more power."

Howland, the first author on this paper, was funded by an NSF Graduate Research Fellowship.