Morning Glory Colors Reveal Why Evolution is Stuck in 'Forward' 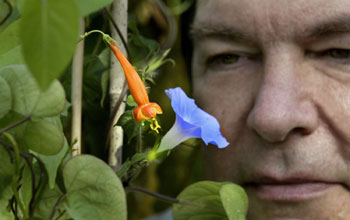 Biologist Mark Rausher with the ancestral blue morning glory flower and the red flower, which ...

Arlington, Va.—Biologists exploring the evolutionary color changes in the morning glory flower have presented the first genetic evidence for the principle that evolution is stuck in "forward gear." Their findings offer an explanation for a widely accepted principle that organisms from microbes to humans cannot recover lost traits by reconstituting molecular pathways once they are altered by mutation.

Biologists Mark Rausher of Duke University and Rebecca Zufall of Smith College report their findings in an article in the April 22, 2004, issue of the journal Nature. Their work was funded by the National Science Foundation (NSF).

The researchers found that, once a molecular pathway alters a mutation of one of its controlling genes, other components of the pathway are freed to accumulate further mutations or to evolve new functions. Thus, recovery of a lost trait becomes all but impossible, because multiple mutations would be required to restore the original pathway.

"Zufall and Rausher have provided a detailed, rigorous test of an important assumption about the evolutionary process," said Mark Courtney, program director in NSF's division of environmental biology, which supported the research. "Because the genetically based changes in biochemical pathways are directly associated with the mode of pollination, these investigators have shed light on a mechanism that may apply to a wide range of plants."

Said Rausher, "There have been many studies that map characters onto a phylogenetic tree. Those kinds of studies have shown that if an organism loses a character, it almost never regains it. But it really takes investigation into the genetic and biochemical pathways that produce adaptations, and how they change in evolution, to understand how these pathways degenerate."

According to Rausher, the evolution of the color of the morning glory flower is an excellent model to study such changes. Flower colors are produced by various members of the group of plant compounds called anthocyanins. These pigment molecules are synthesized by specialized biochemical pathways found in many plant species.

Biological studies of morning glories have shown that the most ancestral type produced a pigment that made it a blue or purple color. Those earliest flowers were pollinated primarily by bees. But in some past period, another strain of red- flowered morning glory evolved under pressure to become more attractive to another pollinator: the hummingbird.

The principal blue/purple pigment is called cyanidin; the red pigment is called pelargonidin. Zufall and Rausher compared the differences in anthocyanin pathways in the two types of morning glories to determine the subtle alterations in enzymes that created the flower color changes.

In particular, the biologists examined the enzymes at or near the branching point in the pathways that would produce cyanidin or pelargonidin.

The researchers also found subtle changes in enzyme functions that would favor production of the red pigment pathway in the red-flowered plant. Importantly, the researchers found such subtle changes in both the enzyme controlling the branch point in the pigment synthesis pathway, and in an important downstream gene. The gene change transformed the enzyme from a "generalist" that could act on either color pigment to one that could aid only synthesis of the red pigment.

Said Rausher, "These findings provide a concrete example of what biologists have believed -- that such ecologically important characters as flower color are the result of a developmental process that involves many genes. And if you knock out any one of those genes, the other genes in the pathway are essentially free to decay or to take on new functions."

Rausher and his colleagues are continuing their studies to explore the detailed pigment synthesis pathways of other morning glory species, including white-flowered and other red-flowered species. Such studies, said Rausher, could reveal yet more insights into how evolutionary pressures affected the biological machinery of pigment production.