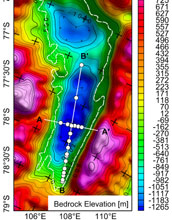 An image of the contours of the bed of Lake Vostok from data obtained by gravity measurements.

ARLINGTON, Va.—Scientists from the Lamont-Doherty Earth Observatory (LDEO) at Columbia University and Rensselaer Polytechnic Institute in New York State have developed the first-ever map of water depth in Lake Vostok, which lies between 3,700 and 4,300 meters (more than 2 miles) below the continental Antarctic ice sheet. The new comprehensive measurements of the lake—roughly the size of North America's Lake Ontario—indicate it is divided into two distinct basins that may have different water chemistry and other characteristics. The findings have important implications for the diversity of microbial life in Lake Vostok and provide a strategy for how scientists study the lake’s different ecosystems should international scientific consensus approve exploration of the pristine and ancient environment.

Michael Studinger, of the Lamont-Doherty Earth Observatory (LDEO) at Columbia University, said that the existence of two distinct regions with the lake would have significant implications for what sorts of ecosystems scientists should expect to find in the lake and how they should go about exploring them.

The National Science Foundation (NSF), an independent federal agency that supports fundamental research and education across all fields of science and engineering, supported the work. NSF manages the U.S. Antarctic Program, which coordinates almost all U.S. science on the southernmost continent.

The new measurements are significant because they provide a comprehensive picture of the entire lakebed and indicate that the bottom of the lake contains a previously unknown, northern sub-basin separated from the southern lakebed by a prominent ridge.

Using laser altimeter, ice-penetrating radar and gravity measurements collected by aircraft, Studinger and Robin Bell, of LDEO, and Anahita Tikku, formerly of the University of Tokyo and now at Rensselaer Polytechnic Institute, estimate that Lake Vostok contains roughly 5400 cubic kilometers (1300 cubic miles) of water. Their measurements also indicate that the top of the ridge dividing the two basins is only 200 meters (650 feet) below the bottom of the icesheet. Elsewhere, the water ranges from roughly 400 meters (1,300 feet) deep in the northern basin to 800 meters (2,600 feet) deep in its southern counterpart.

Water that passes through the lake starts on one end as melted ice from the very bottom of the ice sheet, which refreezes at the other end. According to the new measurements, the base of the ice sheet melts predominantly over the smaller northern basin, while the water in the lake refreezes over the larger southern basin. The researchers assert that water takes between 55,000 and 110,000 years to cycle through the lake.

The arrangement of the two basins, their separation and the characteristics of the meltwater may, the scientists conclude, all have implications for the circulation of water within the lake. It is possible, for example, that if the water in the lake were fresh, meltwater in the northern basin would sink to the bottom of that basin, limiting the exchange of waters between the two basins. The meltwater in the adjacent basin likely would be different.

The two lake basins, they argue, could therefore have very different bottoms.

The scientists also point out that the waters of the two basins may, as a result of the separation, have a very different chemical and even biological composition. Indeed, Lake Vostok, is also of interest to those who search for microbial life elsewhere in the solar system. The lake is thought to be a very good terrestrial analog of the conditions on Europa, a frozen moon of Jupiter. If life can exist in Vostok, scientists have argued, then microbes also might thrive on Europa.

The new measurements also indicate that different strategies may be needed to target sampling of specific types of lake sediments. Those released from the ice sheet represent the rocks over which the ice traveled, for example, and would be more prominent in the northern basin. Material in the southern basin would be more likely to represent the environmental conditions before the ice sheet sealed off the lake.

Scientists deciding whether and how to proceed with an exploration of Lake Vostok say a great deal of technological development would likely be needed before a device could be deployed to conduct contamination-free sampling. Currently, no scientific sampling of the lake is being carried out.

The ultimate goal of any sampling would be to obtain water and sediment samples from the lake bottom.

The team published the new maps in the June 19 edition of Geophysical Research Letters, a publication of the American Geophysical Union.