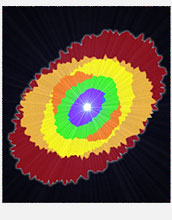 A giant flash of energy from a supermagnetic neutron star thousands of light-years from Earth may shed a whole new light on scientists' understanding of such mysterious "magnetars" and of gamma-ray bursts.  In the nearly two months since the blast, the National Science Foundation's Very Large Array (VLA) telescope has produced a wealth of surprising information about the event, and "the show goes on," with continuing observations.

The blast from an object named SGR 1806-20 came on Dec. 27, 2004, and was first detected by orbiting gamma-ray and X-ray telescopes. It was the brightest outburst ever seen coming from an object beyond our own solar system, and its energy overpowered most orbiting telescopes. The burst of gamma rays and X-rays even disturbed the Earth's ionosphere, causing a sudden disruption in some radio communications.

While the intensely bright gamma ray burst faded in a matter of minutes, the VLA and other radio telescopes have been tracking the explosion's "afterglow" for weeks, providing most of the data astronomers need to figure out the physics of the blast.

A magnetar is a superdense neutron star with a magnetic field thousands of trillions of times more intense than that of the Earth. Scientists believe that SGR 1806-20's giant burst of energy was somehow triggered by a "starquake" in the neutron star's crust that caused a catastrophic disruption in the magnetar's magnetic field. The magnetic disruption generated the huge burst of gamma rays and "boiled off" particles from the star's surface into a rapidly expanding fireball that continues to emit radio waves for weeks or months.

The VLA first observed SGR 1806-20 on Jan. 3, and has been joined by other radio telescopes in Australia, the Netherlands, and India. Scientific papers prepared for publication based on the first month's radio observations report a number of key discoveries about the object. Scientists using the VLA have found:

· The fireball of radio-emitting material is expanding at roughly one-third the speed of light.

· The expanding fireball is elongated, and may change its shape quickly.

· Alignment of the radio waves (polarization) confirms that the fireball is not spherical.

· The flare emitted an amount of energy that represents a significant fraction of the total energy stored in the magnetar's magnetic field.

Of the dozen or so magnetars known to astronomers, only one other has been seen to experience a giant outburst. In 1998, SGR 1900+14 put out a blast similar in many respects to SGR 1806-20's, but much weaker.

National Radio Astronomy Observatory (NRAO) astronomer Dale Frail observed the 1998 outburst and has been watching SGR 1806-20 for a decade. Both magnetars are part of the small group of objects called soft gamma-ray repeaters, because they repeatedly experience much weaker outbursts of gamma rays. In early January, he was hosting a visiting college student while processing the first VLA data from SGR 1806-20's giant outburst.

"I literally could not believe what I was looking at," Frail said. "Immediately I could see that this flare was 100 times stronger than the 1998 flare, and 10,000 times brighter than anything this object had done before."

"I couldn't stay in my chair, and this student got to see a real, live astronomer acting like an excited little kid," Frail said.

The excitement isn't over, either. "The show goes on and we continue to observe this thing and continue to get surprises," said Greg Taylor, an astronomer for NRAO and the Kavli Institute of Particle Astrophysics and Cosmology in Stanford, Calif..

One VLA measurement may cause difficulties for scientists trying to fit SGR 1806-20 into a larger picture of gamma ray bursts (GRBs). GRBs, seen regularly from throughout the universe, come in two main types--very short bursts and longer ones. The longer ones are generally believed to result when a massive star collapses into a black hole, rather than into a neutron star as in a supernova explosion. The strength and short duration of SGR 1806-20's December outburst has led some astronomers to speculate that a similar event could be seen out to a considerable distance from Earth. That means, they say, that magnetars may be the source of the short-period GRBs.

That interpretation is based to some extent on a previous measurement that indicates SGR 1806-20 is nearly 50,000 light-years from Earth. One team of observers, however, analyzed the radio emission from SGR 1806-20 and found evidence that the magnetar is only about 30,000 light-years distant. The difference, they say, reduces the likelihood that SGR 1806-20 could be a parallel for short-period GRBs.

In any case, the wealth of information astronomers have gathered about the tremendous December blast makes it an extremely important event for understanding magnetars and GRBs.