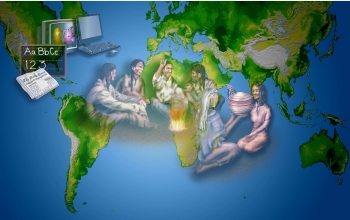 Today, the National Science Foundation (NSF) and the National Endowment for the Humanities (NEH) announced the recipients of 13 fellowships and 26 institutional grants as part of the agencies' joint Documenting Endangered Languages (DEL) project—a new, multi-year effort to digitally archive at-risk languages before they become extinct. Experts estimate that almost half of the world's 6000-7000 existing languages are endangered. The DEL awards, totaling $4.4 million, will support the digital documentation of more than 70 of them.

"Endangered languages are an irreplaceable source of linguistic and cognitive information," according to NSF Director Arden L. Bement, Jr. "Modern cyberinfrastructure tools enable us to investigate these phenomena more exactly and more comprehensively."

The DEL grants support a variety of researchers and reflect efforts to document dying languages around the globe. For example, the Museum of the Cherokee Indian in Cherokee, N.C. was awarded a grant to translate and digitize 19th-century Cherokee language materials from the Smithsonian Institution. Scientists at Cornell and Northern Arizona Universities will gather ultrasound and airflow data to determine just how the "click" sounds of South Africa's N/u language are produced.  Only 13 fluent N/u speakers remain.  Kristine Stenzel from the University of Colorado will document and analyze Piratapuyo--an Amazon language that uses an extremely rare word order: Object-Verb-Subject.

Researchers at the University of Alaska, Fairbanks will digitize 1,000 Yup'ik audio recordings for storage at the Arctic Region Supercomputing Center and assess the feasibility of creating a Northern Indigenous Languages Archive for the region's 200 endangered languages. Three DEL fellowship awardees will independently document several endangered Austronesian languages--including ones spoken in Taiwan, the Philippines and on Easter Island. On Easter Island, use of Rapa Nui declined from 77 percent to 7.5 percent among elementary school children over a 20-year period.

"This is a rescue mission to save endangered languages," says NEH Chairman Bruce Cole of the DEL program. "Language is the DNA of a culture, and it is the vehicle for the traditions, customs, stories, history, and beliefs of a people. A lost language is a lost culture. Fortunately, with the aid of modern technology and these federal funds, linguistic scholars can document and record these languages before they become extinct."

Heidi Harley, University of Arizona, The Morphosyntax of Verbs in Arizona Yaqui, $159,992 (NSF)

Paula Rogers, The Documentation of Saaroa