Analysis of the Sumatra-Andaman Earthquake Reveals Longest Fault Rupture Ever 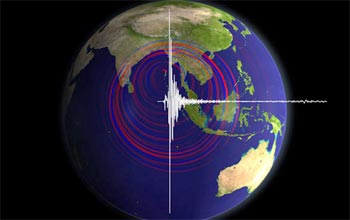 The December 2004 tsunami-producing earthquake sent reverberations around the world.

Three papers published in the May 20 issue of the journal Science by an international group of seismologists provide a comprehensive scientific analysis of the December 2004 and March 2005 earthquakes, and discuss future earthquake potential near Sumatra and the Andaman Islands.  The data raise new concerns about the possibility of earthquakes in a region to the southeast of the great Sumatra-Andaman earthquake of  Dec. 26, 2004, which last experienced a great earthquake in 1833.

The Incorporated Research Institutions for Seismology (IRIS), a university research consortium, played a central role in these reports. IRIS, funded by the National Science Foundation (NSF), operates a global network of seismic monitoring stations that provided much of the data for the analysis.

"The extensive seismological data that underlies the scientific results in these papers is a result of the 20-year investment by NSF and the U.S. Geological Survey to develop the Global Seismic Network," said James Whitcomb, section head in NSF's earth sciences division.  "This far-flung network of more than 130 seismic sensors, on every continent and all major oceanic islands, provides essential information for earthquake warnings and for research on earthquakes and deep-Earth structure."

The great Sumatra-Andaman earthquake was an event of stunning proportions, both in its human dimensions--nearly 300,000 lives lost--and as a geological phenomenon. The sudden rupture of a huge fault beneath the Indian Ocean unleashed a devastating tsunami. It was the largest earthquake in the past 40 years and was followed by the second largest just three months later on March 28, 2005.

Record-setting features of the Sumatra-Andaman earthquake of Dec. 26, 2004, include the longest fault rupture ever observed (720 to 780 miles or 1,200 to 1,300 kilometers) and the longest duration of faulting (at least 10 minutes). The aftershocks included the most energetic earthquake swarm ever observed.

Said Thorne Lay, a geologist at the University of California at Santa Cruz, "We've never had such comprehensive data for a great earthquake, because we didn't have the instrumentation to gather it 40 years ago."

Lay is lead author of one of the reports, which provides an overview of the two earthquakes, and is a co-author of a second report, which focuses on the processes involved in the rupture of the fault. A third article describes how the earthquakes caused the whole planet to vibrate with "free oscillations," like the ringing of a bell.

"The research results presented in these papers are major steps forward in our understanding of how great earthquakes happen," said David Simpson, president of IRIS.  "With 40 authors from seven countries, the papers are wonderful examples of international scientific collaboration.  These results were possible only with the open sharing of data from multi-national sensor networks, and close collaboration among seismologists worldwide."

The two earthquakes are the largest since the global deployment of highly sensitive digital broadband seismometers. These instruments, deployed around the world by IRIS and other organizations, recorded both the huge ground motions from the mainshocks and the tiny motions from small aftershocks and free oscillations of the planet.

The ground motions during the prolonged, intense shaking of the main shock were greater than in any earthquake previously recorded by global broadband seismometers. As far away as Sri Lanka, a thousand miles from the epicenter, the ground moved up and down by more than 3.6 inches (9 centimeters). Ground motions greater than one-half inch, but too gradual to be felt, occurred everywhere on Earth's surface as seismic waves from the event spread around the globe.

During the Sumatra-Andaman earthquake, the ground shook more than 100 times harder than it did during  the 1989 California Loma Prieta earthquake--a magnitude 6.9 event that caused major destruction from Santa Cruz to the San Francisco Bay.

"Even among seismologists, we call this a monster earthquake," Lay said.

Released by the rupture of the fault, the edge of the plate sprang back up, lifting the ocean floor and setting off the tsunami that inundated coastal areas throughout the Indian Ocean. The fault slipped by as much as 50 feet (15 meters) in places, averaging about 33 feet (10 meters) of displacement along the segment off the northwestern tip of Sumatra where the quake was centered.

"The earthquake rupture ran a distance equivalent to the area from Jacksonville, Fla., to Boston, Mass.," said Charles Ammon, a geoscientist at Penn State University and lead author of one of the reports.  "This earthquake lasted just under 10 minutes, while most large earthquakes take only a few seconds."

From the epicenter, the rupture expanded along the fault at a speed of about 1.5 miles (2.5 kilometers) per second  toward the north-northwest. But the initial movement of the fault was much less along the northern segment than in the south. This was fortunate, said Lay, because it spared much of the coastline in the north from the massive tsunami waves that caused the destruction farther south.

Then there were the aftershocks, including the most energetic earthquake swarm ever observed. More than 150 earthquakes of magnitude 5 and greater occurred over a four-day period in late January on faults beneath the Andaman Sea.  These faults were activated by the rupture of the main fault along the plate boundary to the west. There were also numerous aftershocks of magnitude 6 and greater throughout the fault zone.

"It's an incredible aftershock series," Lay said. "It is hard to get a feeling for the scale of it. If you take the aftershock zone and superimpose it on California, it completely covers the state."

The Sumatra-Andaman earthquake produced the best documentation of Earth's free oscillations ever recorded, said geologist Jeffrey Park of Yale University, lead author of  one of the reports.  The free oscillations have natural periods that depend on the composition and temperature of Earth's deep interior.  "Just like grocery shoppers thump a watermelon to find out whether it's ripe, seismologists measure the natural tones from earthquakes to detect properties of Earth’s deep mantle and core," said Park.  "This huge earthquake may resolve several controversies, such as whether a heavy slagheap of old tectonic plates is stuck near the core-mantle boundary beneath Africa."

The March 28, 2005, earthquake struck with a magnitude of 8.6 on an adjacent portion of the plate boundary to the southeast. This was not an aftershock, but a new rupture of an adjacent segment of the fault.

There is the potential for future major earthquakes not only on the thrust fault along the plate boundary, said Lay, but also on a related fault system beneath the island of Sumatra that involves horizontal shearing, the same type of faulting that occurs on the San Andreas Fault.

"The Sumatra Fault runs right down the length of the island. Because it is close to major population centers, the seismic hazard is significant even for a smaller event," Lay said.

Major faults elsewhere in the world--in northern Turkey, for example--have experienced sequences of earthquakes moving progressively along a fault line.

"When one part of the fault slides, that loads up the adjacent region and transfers stress. So you have a heightened potential for earthquakes on the adjacent section. The concern is that something like this could happen in Sumatra," Lay said.

The three papers published this week in Science and their authors are as follows:

"The Great Sumatra-Andaman Earthquake of 26 December 2004"