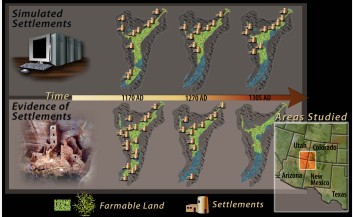 According to new research, climate change alone cannot explain why the Puebloan people—also known as Anasazi—abruptly abandoned the Four Corners region of the U.S. Southwest in the 1300s after residing there for hundreds of years. Human impact on the environment, high population levels and social and political factors, including violent conflict, likely played important roles.

Tim Kohler of Washington State University bases this conclusion on the results of computer modeling simulations and traditional archaeological research performed by his NSF-supported research team.

Most of what we know about human history didn't come from texts; it was carefully reconstructed from archeological evidence, including tools, pottery and architecture, left behind by ancient societies. While artifacts provide a glimpse of long-gone societies, they usually can't capture the dynamic factors that shaped and changed them.

For many years, researchers have used computer models to fill in the gaps of our unwritten history.  But today's "object-oriented" computer languages such as Java, take computer modeling to a new level. Object-oriented programming languages let scientists simulate the behavior of ancient societies and their responses to environment change the same way players control virtual households in the popular computer game The Sims™.

"Computer models can provide basic insights regarding how individuals, households and even entire societies may have interacted with the their natural environment," says NSF program director Thomas Baerwald.  Because nature goes through a variety of cycles, we can learn a great deal from these types of studies, he adds.  "There are parallels between what happened in a historical context and what is going on today in these regions."

Kohler's team, and a group lead by George Gumerman of the School of American Research in Santa Fe, used the approach to explore how environmental conditions may have influenced Puebloan people's settlement and land use in the central Mesa Verde region of Colo. and Long House Valley of Ariz.  First, they programmed the computer to simulate the effects of population growth, resource use and other well-documented environmental factors on the behavior of virtual households (see illustration).  Then, they compared the models to the abundant archaeological record of the region.

The simulations indicate environmental factors alone can't explain the abrupt disappearance of the Puebloans from Four Corners region—where Ariz., N.M., Colo. and Utah meet—700 years ago.  They conclude the change was driven by factors not included in their models.

The Mesa Verde experiments suggest the Puebloans impact on the environment through deer hunting, use of fuel wood and soil exhaustion probably contributed to their decisions to leave these areas. "Climate change played an important role, but it did not act in isolation," says Kohler. "Past human land-use and high populations contributed to difficulties in making a living here in the 1200s."

"This approach is becoming more common as a complement—not a substitute—for other analytical approaches for a whole range of fields," according to Baerwald.  Simulations are particularly valuable to historical sciences such as archaeology and the social sciences where researchers either don't have the luxury of performing experiments in real time or it would not be ethical to do so.

A feature about the work, which was funded through an NSF program designed to explore the dynamic interactions between living systems—including human communities—and the environment, appears in the July issue of Scientific American.