Four-legged Family Members Must Be Included in Emergency Plans 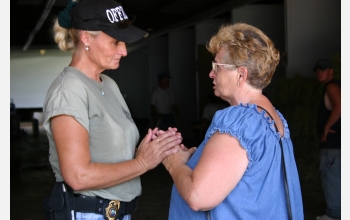 Editor's note: September 2007 has been designated as National Preparedness Month to raise awareness about the importance of emergency preparedness and to encourage all Americans to better prepare their homes and communities for emergencies.

Over the past several decades, household pets have come to occupy an increasingly intimate place in the modern family, gaining nearly the status of children or other loved ones. Yet, according to University of Colorado, Boulder sociologist, Leslie Irvine, caring for pet safety in a disaster has often been an afterthought.

"Almost 100 percent of people who have pets describe them as family members," said Irvine. "And all family members need to be considered in a disaster plan."

In a presentation last week at the annual meeting of the Society for Social Problems in Philadelphia, Irvine said pets and livestock are now on the radar screen when emergency teams respond to a hurricane, chemical spill or other catastrophe.

Nearly a decade ago, that was not the case. Evacuations from Hurricane Andrew left some 1,000 deserted pets to be euthanized for lack of space to care for them. In 1999, more than 3 million pets and farm animals died in the wake of Hurricane Floyd.

Irvine contrasted the loss of animals during those disasters with data she collected in Fla. last year in the aftermath of Hurricane Charley, which was rated a category 4 storm with winds up to 145 miles per hour.

Her main finding: "No animal had to be euthanized due to lack of space."

Irvine also studied how human attitudes, which she calls "myths," influence emergency workers and their approach to free-roaming animals in a disaster area.

"Alongside the myths about looting and price gouging, hurricane Charley revealed the myth of what I call 'the dangerous dog pack,'" she said. Although scientific studies have not confirmed that behavior in newly displaced house pets, it "has serious implications for the treatment of animals displaced by disasters," Irvine said.

Animals may suffer when such myths pervade "Incident Command Systems"--firmly institutionalized and successful sets of procedures for managing people in a crisis. Irvine called for a re-examination and modification of emergency response plans to better reflect actual, personal experiences with animal behavior.

Additional information is available in the University of Colorado press release: http://www.colorado.edu/news/

Information on disaster preparedness for pets, horses and livestock is available through:
The Humane Society of the United States: http://www.hsus.org/hsus_field/hsus_disaster_center
The American Veterinary Medical Association: http://www.avma.org/disaster/saving_family.asp.