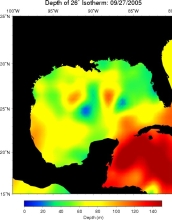 Scientists monitoring ocean heat and circulation in the Gulf of Mexico during Hurricanes Katrina and Rita have a new understanding of how these tropical storms can gain intensity so quickly: The Gulf of Mexico's "Loop Current" is likely intensifying hurricanes that pass over eddies of warm water that spin off the main current.

"A positive outcome of a hurricane season like this is that we've been able to learn more about the Loop Current and its associated warm-water eddies, which are basically hurricane intensity engines," said Nick Shay, a University of Miami Rosenstiel School of Marine and Atmospheric Science (RSMAS) meteorologist and physical oceanographer.

The Loop Current is a horseshoe-shaped feature that flows clockwise, transferring warm subtropical waters from the Caribbean Sea through the Yucatan Straits into the Gulf of Mexico.

This year, the Loop Current extended deep into the Gulf of Mexico during hurricane season. Currents at this time of year typically become unsteady and pinch off deep, warm eddies, said Shay. The warm water then becomes ideal for hurricanes in the process of intensifying.

"Scientists have known that hurricanes form above the world's warmest ocean surface waters," said Jay Fein, program director in the National Science Foundation (NSF)'s Division of Atmospheric Sciences, which funded the research. "This study adds new information about hurricanes' journeys to landfall, and will help to better predict their paths and intensity changes during their final hours over open water."

After Hurricane Katrina and a week before Hurricane Rita, Shay, Peter Black from the NOAA's Atlantic Oceanographic and Meteorological Laboratory (AOML) and Eric Uhlhorn of the University of Miami/NOAA Cooperative Institute for Marine and Atmospheric Science, deployed Airborne Expendable Conductivity, Temperature and Depth profilers (AXCTDs); Current Profilers (AXCPs); and Bathythermographs (AXBTs) to obtain information on water temperature to depths of up to 3,300 feet (1,000 meters).

The AXCTDs and AXCPs, which were funded by NSF, are dropped from aircraft and measure salinity and currents.

Meteorologists are learning a great deal as hurricanes pass over the deep, warm waters of the Loop Current, Shay said. "We have long been aware that these currents are an important way for the ocean to distribute heat and energy, but until now, we just didn't have much data on the role they played in building hurricane intensity."

Two days before Hurricane Rita, Black and Rick Lumpkin of AOML, and Peter Niiler of the Scripps Institution of Oceanography, deployed surface drifters that measure surface and subsurface thermal conditions while traveling clockwise around a Loop Current warm eddy just south of La. The eddy was lying in the path of Rita.

"This represents one of the most comprehensive ocean-data sets where two major hurricanes passed through the same region," said Frank Marks, director of NOAA's Hurricane Research Division. "This series of observations is a testament to how new ocean observations are helping us understand hurricane intensity changes."

"The last time there was a season with two Category 5 hurricanes in the same basin was in 1961 with Carla and Hattie," said Shay. "However, the same phenomenon occurred the year before in 1960 with Donna and Ethel."

Hurricanes Katrina and Rita also have much in common with Hurricane Opal, a category 4 storm that occurred a decade ago, on Oct. 4. During Opal, meteorologists first recognized the pivotal role that deep, warm eddies play in quickly building hurricane intensity. Opal encountered a warm- water eddy in the Gulf of Mexico and strengthened in intensity from Category 1 to Category 4 in just 14 hours.