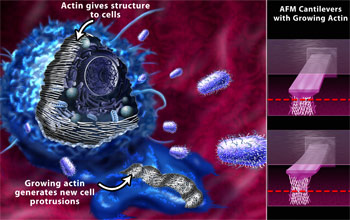 An immune cell known as a macrophage pursues bacteria.

Researchers using a customized atomic force microscope (AFM) have discovered new evidence for how the fibrous scaffolding within our cells, which is made of the protein actin, responds to obstacles in its environment.

The discovery demonstrates a technique for tracking a cell's growth history, and if it proves valid outside of the laboratory, researchers may one day look for actin-growth clues while tracking the pathways of spreading cancers, immune cells, and other free-moving cells that crawl throughout the body.

"How do cells push in a particular direction when they confront a barrier?  That was the initial question in this research," says Fletcher.

When faced with a barrier, the researchers suspect the elongating matrix of filaments in a growing actin network adds more branches to counter the resistance. When the barrier is removed, they believe, the added filaments remain and the network grows at a new, faster rate.

Scientists have known that actin networks, unlike many other cell components, alter their growth in response to forces, not just chemical signals.  The new findings help clarify that response and provide new clues for how our cells stretch, change shape and move around obstacles.

Among other responsibilities, actin provides the structural support for cells and the growth force necessary for certain cellular activities.

"The front of a cell extends forward during crawling, and actin and its associated proteins are necessary for powering that forward motion," says Fletcher. "Other mechanical processes in cells, such as the 'Pac-Man'-like action of an immune cell eating a bacterium, also involve forces generated by growth of actin networks."

The networks are collections of proteins, so they are more complicated and more difficult to study than many other cellular components involved with cell motion and force. To track the growth rate and force generated by actin, the bioengineers modified an atomic force microscope (AFM).

In most research, the business end of an AFM is a miniscule, extremely sharp tip that is attached to a thin silicon-nitride cantilever. Because the tip is so slight, even features as tiny as individual atoms can cause the cantilever to deflect as it passes along, or slightly above, a surface. A laser bounces off the cantilever and into a detector, registering the tiny deflections and providing signals a computer translates into an image.

For this study, the researchers created a specialized AFM that uses two cantilevers and two lasers. Instead of scanning a surface, the cantilevers served as tiny springboards, one to bend as actin grew beneath it and the other to stay as a reference point close to the floor of the sample chamber. Using the two-cantilever system, the researchers pushed longer on the filaments than in any earlier study, and with more force -- in some cases to the point where the filaments stalled and could grow no further.

In multiple experiments, the cantilevers applied an initial force to a slurry of growing actin filaments, then applied a larger force for as long as 30 minutes. They then returned to the original load, at every stage tracking how fast the network grew.

Each time, when the cantilever returned to its original load, the growth velocity of the actin was faster. When the fibers endured multiple load cycles, they grew at a rate that was dependent upon all of the cycles.

"We've found that the growth of actin is dependent on its loading history -- not just on the load it feels at one moment, as we previously thought," says Fletcher. "This means the structure of a cell has some 'memory' of its physical interactions."

The researchers suspect the effect may relate to filament density, and the growth rate may be a function of the network architecture, itself dependent upon the entire load history.

"For a given load, proteins assume a certain network architecture," says Fletcher. "This architecture then remodels under a new load. So, if you go back to the original load, the architecture is still tuned for a higher load, resulting in explosive growth."

These are fundamental research findings, adds Fletcher, but in the long term they may help scientists and engineers understand cell crawling, potentially aiding future treatments that help white blood cells work better or stop tumor cells from moving to other parts of the body.