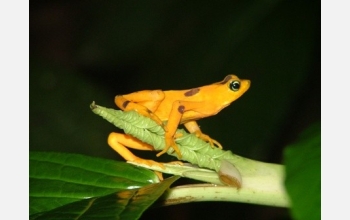 The Panamanian golden frog is one of more than 100 disappearing species of harlequin frogs.

Results of a new study provide the first clear proof that global warming is causing outbreaks of an infectious disease that is wiping out entire frog populations and driving many species to extinction.

Published in the Jan. 12 issue of the journal Nature, the study reveals how the warming may alter the dynamics of a skin fungus that is fatal to amphibians. The climate-driven fungal disease, the author's say, has hundreds of species around the world teetering on the brink of extinction or has already pushed them into the abyss.

"Disease is the bullet that's killing the frogs," said J. Alan Pounds, the study's lead scientist affiliated with the Tropical Science Center's Monteverde Cloud Forest Preserve in Costa Rica. "But climate change is pulling the trigger. Global warming is wreaking havoc on amphibians, and soon will cause staggering losses of biodiversity," he said.

"The good news, if there is any, is the new findings will open up avenues of research that could provide scientists with the means to save the amphibians that still survive," said Bruce Young, a zoologist at NatureServe who took part in the study. "If this cloud has any silver lining, that's it."

The new theory for the frogs' decline "leaps over a major roadblock in our understanding," said Sam Scheiner, program director in NSF's division of environmental biology, which funded the study through the Research Coordination Network (RCN) Program.

"This study demonstrates the complex nature of global climate change, including how climate affects the spread of disease, and why these must be integrated if we are to understand and reduce threats to species extinctions."

But the message goes beyond amphibians, says Scheiner: global warming and the accompanying emergence of infectious diseases are a real and immediate threat to biodiversity and a growing challenge for humankind.

The decline of amphibians in apparently pristine, protected habitats in Costa Rica and elsewhere has perplexed conservation biologists since 1990, when the problem was first recognized. At least 110 species of brightly colored harlequin frogs once lived near streams in the tropics of Central and South America, but about two-thirds vanished in the 1980s and 1990s.

In the famed Costa Rican cloud forests, for example, the Monteverde harlequin frog disappeared in the late 1980s, as did the golden toad, whose much-publicized extinction, said Pounds, "was the first sign of this emerging threat to species survival."

Using records of sea-surface and air temperatures, Pounds and colleagues show that harlequin frogs are disappearing in near lockstep with changing climate. According to the scientists, the Earth's rising temperatures enhance cloud cover on tropical mountains, leading to cooler days and warmer nights, both of which favor the chytrid fungus. The organism grows and reproduces best at temperatures between 63 to 77 degrees Fahrenheit (17 to 25 degrees centigrade).

The fungus kills frogs mostly in cool highlands or during winter, implying that low temperatures make it more deadly. So the idea that it flourishes in warm years, which the evidence now supports, is new.

The study results come at a time of growing concern about the future of amphibians. The Global Amphibian Assessment, published in 2004, found that nearly one-third of the world's 6,000 or so species of frogs, toads and salamanders face extinction--a figure far greater than that for any other group of animals.

The discovery is the result of research also made possible by the NatureServe, the Tropical Science Center, Conservation International, the Declining Amphibian Populations Task Force, the Canada Foundation for Innovation, the Tinker Foundation and RANA, the Research and Analysis Network for Neotropical Amphibians.