A Science or Engineering Bachelor's Degree Is Good for You

Degree holders find it valuable in a variety of jobs 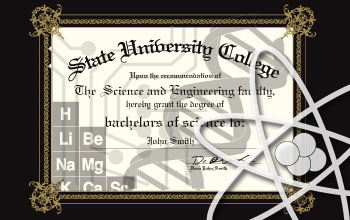 A science or engineering bachelor's degree is useful even in non-technical jobs.

Earning a bachelor's degree in science or engineering (S&E) appears to serve the recipient well in the workforce, regardless of the job they do. In fact, according to a National Science Foundation (NSF) survey, people who have earned an S&E bachelor's degree generally report that science and engineering knowledge is important to their job.

That holds even if the graduate ends up doing non-technical work. According to the survey, among those workers whose only degree was an S&E bachelor's, 27 percent had S&E occupations. Sixty-three percent working in non-technical fields still said their jobs were related to their S&E degree.

Of those who went on to receive advanced degrees, the largest proportion, almost 29 percent, took those degrees in non-S&E fields, namely business, law or medicine.

"S&E knowledge remained important to the jobs of most S&E bachelor's holders with advanced degrees--being reported as necessary by a majority of both those with master's degrees in business and those with other non-S&E advanced degrees," the survey said.

The data are reported in the NSF InfoBrief, What Do People Do After Earning a Science and Engineering Bachelor's Degree?

The report used data from the NSF's 2003 SESTAT survey--a pooled set of large demographic and workforce surveys--and included responses from people who had earned a bachelor's degree in science or engineering at least 10 years earlier.

About half of those who earned an S&E bachelor's earned no additional degree. Only slightly more than 4 percent earned a Ph.D. in the same field as their bachelor's. The remainder earned advanced degrees in a wide variety of fields.

Related Websites
InfoBrief: What Do People Do After Earning an S&E Bachelor's Degree?: http://www.nsf.gov/statistics/infbrief/nsf06324/