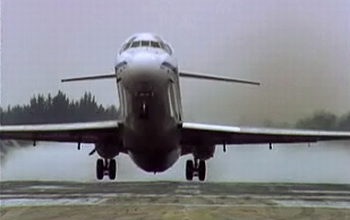 A short film illustrates one of the new approaches to airport security.

On Sept. 28, 2006, experts in sensor technology, behavioral screening and biometrics will participate in a call-in program on the latest developments in airport security.The program will emphasize projects already in the testing stages that should dramatically improve the safety, speed and efficiency of a trip through the airport.The researchers will showcase how airport security is expanding beyond determining a terrorist's capability--such as a search for knives or liquid explosives--to determining a terrorist's intent by pairing next-generation monitoring systems with an understanding of culturally independent behavioral cues.

The call-in program will feature an introduction from the participants followed by a question and answer session moderated by NSF's Richard McCourt. Since conference call lines are limited, please RSVP to NSF media officer Josh Chamot at jchamot@nsf.gov or (703) 292-7730. The show is now available online.

Montana Tech of the University of Montana, Butte, Mont. 59701

With NSF sponsorship, he expanded his interests into the RAVE Technical Development Center, which was developed to foster mutually beneficial partnerships among Montana's small businesses and the Montana University System using collaborative methods. One of the most successful of these projects has been the RAVE Creativity Forge, a state-of-the-art precision manufacturing center with the following objectives: high performance facility for area entrepreneurs and manufacturers to research manufacturing strategies in order to make strategic business decisions and to research manufacturing strategies for overcoming production bottlenecks; high performance facility to train technology and engineering students in next generation manufacturing, design and business practices; and programs and processes through which area businesses will directly interface with students of the MUS and assist in curriculum development. The Forge is also doing machine vision research using neural networks and artificial intelligence.

Mark Frank received his Ph.D. in Social Psychology from Cornell University in 1989. He then received a National Research Service Award from the National Institute of Mental Health to do postdoctoral research in the Psychiatry Department at the University of California at San Francisco Medical School, where he worked with Dr. Paul Ekman. In 1992, he joined the School of Psychology at the University of New South Wales in Sydney, and 4 years later joined the Communication Department at Rutgers University in New Jersey.

In 2005, he returned to his hometown by accepting a position in the Department of Communication at the University of Buffalo. He has published numerous research papers on facial expressions and interpersonal deception. He has used these findings to consult and train various law enforcement groups in the United States, such as the Los Angeles Sheriff's Department, the New Jersey State Troopers, the International Association of Arson Investigators, the National Response Team, the Bureau of Alcohol, Tobacco, & Firearms, the Federal Bureau of Investigation and the State Department, as well as other government and local law enforcement agencies.

Overseas, Frank also has used his findings to discuss, consult with, or train law enforcement agencies, such as the Metropolitan Police Service in London (Scotland Yard), the Nottinghamshire and Kent Constabularies, the National Crime Faculty, Australian Customs, Australian Federal Police, as well as Dutch, Belgian, and Singaporean authorities. He has given workshops to the Federal Judiciary, U.S. District Court, Pennsylvania State Trial Judges, New Jersey Judicial College, the New South Wales magistrates and District Court in Australia, and the Belgian Magistrates. He has also presented a briefing on behalf of the Consortium of Social Science Agencies to the U.S. Congress on Deception and Counter-terrorism.

A leading authority on behavioral observation, Frank currently is working with the Transportation Security Administration to further develop and test the TSA's new behavioral screening program, which will be implemented in 40 major airports nationwide. His research is funded by the National Science Foundation and the Department of Homeland Security.

Frank has appeared in over 60 print, radio, and television appearances to talk about some of his work, including in the Australian Today Show, ABC Radio National, The Sydney Morning Herald, the BBC, National Public Radio, New Yorker Magazine, the New York Times, the Philadelphia Inquirer, CBS' 48 Hours, Dateline NBC, The Learning Channel, the Discovery Channel, The National Geographic Channel, CNN, Fox News Channel, and Oprah.

In general, Dr. Frank's research interests are in nonverbal communication, conducting his research along with colleagues Javier Movellan and Marni Bartlett, who direct the machine perception lab at the University of California at San Diego. In particular, he is interested in facial expressions, emotions, and body language and how they relate to deception. Within deception, he is interested in the behaviors associated with deception, the ability of professionals and lay people to spot deception, and the structural/methodological features associated with deception in real life contexts such as counter-terrorism, policing, and the law, and how they help or hinder people's abilities to detect deception. Finally, he is interested in the role of technology to augment the behavioral observation process in emotion and deception research.

In terms of airport security, Dr. Frank has been studying behaviors related to hostile intent in checkpoint situations. Simulating an airport screening scenario, Dr. Frank has been studying the types of behaviors that may betray an individual intent on committing a malfeasant act. These contexts involve stand up and face to face interviews. He has been a pro-bono consultant to TSA and their behavioral SPOT (Screening Passenger by Observational Techniques) program, helping them to understand in a variety of ways the science behind what it is they see daily. He has in the airports with these teams from TSA and the Massachusetts State Police observing them and their procedures and engaging in a dialogue with them from the point of view of a practitioner/scientist.

Dr. Frank has research funding from NSF (0454183, 0534183, 0627822) to develop a real-time prototype to measure the face for emotion, which would have enormous utility for airport and other screening situations, and will examine how these procedures fit with human operators and decision making to optimize the utility of any product developed.

Arun Ross is an assistant professor in the Lane Department of Computer Science and Electrical Engineering at West Virginia University in Morgantown, West Virginia.

He received the B.E. (Hons.) degree in computer science from the Birla Institute of Technology and Science in Pilani, India, in 1996, and the M.S. and Ph.D. degrees in computer science and engineering from Michigan State University in 1999 and 2003, respectively. Between 1996 and 1997, he was with the Design and Development Group of Tata Elxsi (India) Ltd., Bangalore, India. He also spent three summers (2000--2002) with the Imaging and Visualization Group at Siemens Corporate Research, Inc., Princeton, NJ, working on fingerprint recognition algorithms.

He has authored several journal and conference articles in biometrics, and has presented his research work at various international meetings. He will be a speaker at the Kavli Frontiers of Science Symposium organized by the National Academy of Sciences in November 2006. Ross served as the US expert in multibiometrics at the ISO/IEC JTC1 SC37 meeting for biometric standards in 2004 and is the co-author of the book "Handbook of Multibiometrics" published by Springer in 2006.

PI: Stuart Farquharson, Real-Time Analyzers; Stu@rta.biz
NSF awards linked here and here
Web site: www.rta.biz
Related research papers and application descriptions: http://www.rta.biz/application_notes.htm
Summary: The RTA Hoax Exposormeasures the Raman spectrum of any material within the time frame of one minute. Materials can be chemical or biological, including bacterial spores. Every material, including biological spores, has a unique Raman spectral signature that allows its positive identification. The Raman signature of a suspicious material can be matched to one of thousands of signatures stored in memory in less than one second.

PI: Richard Radke, Rensselaer Polytechnic University; rjradke@ecse.rpi.edu
Homepage: http://www.ecse.rpi.edu/~rjradke/index.htm
NSF award linked here
Related research papers (most relevant to security near the top): http://www.ecse.rpi.edu/~rjradke/pubs.htm
Summary: Radke and his colleagues are developing a new framework for the distributed processing of images from networks of literally hundreds of cameras whose positions and orientations are not known in advance and in which cameras may appear, disappear and move about. Conventional computer vision methods are not adequate for such networks, because they assume a small, fixed number of stationary cameras that can be centrally, simultaneously processed.

PI: Sheldon Jacobson, University of Illinois at Urbana-Champaign; shj@uiuc.edu
NSF award linked here
Web site, including a short video: https://netfiles.uiuc.edu/shj/www/shj.html
Summary: Jacobson and his colleagues focus their research activities on identifying new approaches to use and allocate security resources that can lead to higher levels of security with minimal inconvenience to passengers. Much of the work has focused around checked baggage screening.

PI: Mary Peterson, University of Arizona, mapeters@u.arizona.edu
NSF awards: 8810997, 0425650, 9906063, 9009100, 8810997
Web site: http://www.u.arizona.edu/~mapeters/
Summary: When familiar objects are viewed in their typical upright orientation, they are more likely to stand out as objects against backgrounds. This basic effect has relevance for airport security, including identification of weapons in luggage, as objects cannot be detected or identified unless they are initially segregated from their backgrounds. The researchers are currently examining how familiarity interacts with background features, studies that relate to airport security because the typical contents of luggage provide changing background features.

PI: Wayne Wolf, Princeton University, wolf@Princeton.EDU
NSF awards: multiple awards linked here
Web site: http://www.verificon.com/
Home page: http://www.princeton.edu/~wolf
Summary: Under an NSF ITR CCF-0325119, a joint project between University of Maryland professors Shuvra Bhattacharyya and Rama Chellapa and Princeton University professor Wayne Wolf, the researchers are developing distributed smart camera systems. These camera systems cooperate in real time to analyze activities in a scene, such as movements of people, vehicles and other objects. Distributed smart camera systems can be used in airport terminals, train terminals and other public locations to understand the actions of both individuals and large groups of people. Verificon Corporation was spun out of Princeton University in 2003 to commercialize smart camera technology developed at Princeton and funded by the National Science Foundation, the New Jersey Commission on Science and Technology, and DARPA. Verificon is now developing a video analysis system for use in transportation terminals.

A larger sampling of NSF awards related to airport security can be found here.