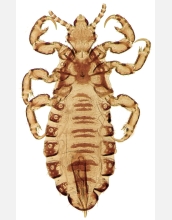 An image taken through a microscope shows a head louse up close and personal.

Biologists have invented a chemical-free, hairdryer-like device--the LouseBuster--and conducted a study showing it eradicates head lice infestations on children by exterminating the eggs, or "nits," and killing enough lice to prevent them from reproducing.

"The LouseBuster is particularly effective because it kills louse eggs, which chemical treatments have never done very well," said Dale Clayton, a University of Utah biologist who led the research and co-invented the machine. "It also kills hatched lice well enough to eliminate entire infestations."

The machine blows warm air through a flexible hose, which has a rake-like hand piece on the end. It kills lice and nits by drying them out, not by heating them. It works in one 30-minute treatment. Comparatively, chemical treatments require multiple applications 1 to 2 weeks apart.

"This research has dramatically improved our understanding of these parasites and how to deal with them," said Juan Carlos Morales, a program director in the National Science Foundation's Division of Environmental Biology. "The LouseBuster is an example of the important benefits to society that result from basic biological research."

The study was published in the November 2006 issue of the journal Pediatrics. Supporters of the research include the Utah Center of Excellence Program, University of Utah, Primary Children's Medical Center Foundation and the National Pediculosis Association. The development was also funded in part by the National Science Foundation.

In the new study, the researchers tested six ways of applying hot air to children's lice-infested scalps. The tests were conducted during 2001-2005 on 169 infested children who were solicited for the study by flyers distributed in dozens of Salt Lake Valley schools. The researchers reported an 80 percent kill rate that was high enough to prevent remaining lice from breeding - possibly due to stress or sterilization - so virtually all subjects were cured of head lice when examined one week following treatment with the LouseBuster.

The LouseBuster is in the early stages of commercial development by a University of Utah spin-off company, Larada Sciences, at which Clayton is chief scientific officer. Patents are pending on the LouseBuster technology, which Clayton hopes will be on the market within 2 years for use in schools and clinics.

This research was funded by NSF's Partnerships for Enhancing Expertise in Taxonomy (PEET) program.