Skeleton to be unveiled at U.S. museum Dec. 13 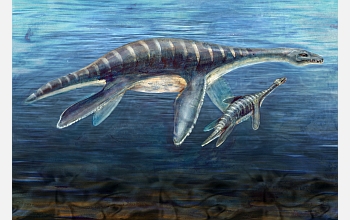 Amid 70-mile-an-hour winds and freezing Antarctic conditions, an American-Argentine research team has recovered the well-preserved fossil skeleton of a juvenile plesiosaur--a marine reptile that swam the waters of the Southern Ocean roughly 70 million years ago.

The fossil remains represent one of the most-complete plesiosaur skeletons ever found and is thought to be the best-articulated fossil skeleton ever recovered from Antarctica. The creature would have inhabited Antarctic waters during a period when the Earth and oceans were far warmer than they are today.

James E. Martin, curator of vertebrate paleontology and coordinator of the paleontology program at the South Dakota School of Mines and Technology's Museum of Geology, announced today the plesiosaur bones will be unveiled at the museum on Dec.13, 2006.

The long-necked, diamond-finned plesiosaurs are probably most familiar as the legendary inhabitants of Scotland's Loch Ness, although scientific evidence indicates the marine carnivores have been extinct for millions of years. But when the creatures were alive, their paddle-like fins would have allowed them to "fly through the water" in a motion very similar to modern-day penguins.

Martin, an expert on fossil marine reptiles, co-led the 2005 expedition to Antarctica that recovered the plesiosaur. Judd Case, of Eastern Washington University, and Marcelo Reguero of the Museo de La Plata, Argentina, were also co- leaders.

NSF manages the U.S Antarctic Program, which coordinates all U.S. research on the southernmost continent. The White House has designated NSF as the lead federal agency for the International Polar Year, a 2-year global research campaign in the polar regions that begins in March 2007.

Preserved by a volcanic blast?

After it was prepared in the United States, Martin said, the specimen was discovered tobe the 5-foot-long (1.5 meters) skeleton of a long-necked (elasmosaurid) plesiosaur. An adult specimen could reach over 32 feet (10 meters) in length. Most of the bones of the baby plesiosaur had not developed distinct ends due to the youth of the specimen, he said.

But the animal's stomach area was spectacularly preserved. Stomach ribs (gastralia) span the abdomen, and rather than being long, straight bones like those of most plesiosaurs, these are forked, sometimes into three prongs. Moreover, numerous small, rounded stomach stones (gastroliths) are concentrated within the abdominal cavity, indicating stomach stones were ingested even by juvenile plesiosaurs to help maintain buoyancy or to aid digestion.

The skeleton is nearly perfectly articulated as it would have been in life, but the skull has eroded away from the body. Extreme weather at the excavation site on Vega Island off the Antarctic Peninsula and lack of field time prevented further exploration for the eroded skull.

The researchers speculate volcanism similar to the massive eruption of Mt. St. Helens in Washington in 1980, may have caused the animal's death. Excavation turned up volcanic ash beds layered within the shallow marine sands at the site, and chunks of ash were found with plant material inside. That suggests a major blow-down of trees as was observed when Mt. St. Helens erupted. Either the blast or ash dumped into the ocean, the scientists say, may have caused the baby's demise. Moreover, silica released from the ash allowed spectacular preservation of the skeleton.

As with the find of a new species of dinosaur Martin and Case made in Antarctica several years ago, the weather and the harsh Antarctic climate made collecting the plesiosaur specimen exceedingly difficult. Weeks of winds exceeding 70 miles an hour hindered the excavation. At the end of the work, icy temperatures turned water to slush before plaster could be mixed to encase the fossil for transportation. The ground was so frozen a digging tool snapped in half during the excavation. Finally, a jackhammer had to be carried up to the site in backpacks along with gasoline, plaster, and water.

The resulting package of plesiosaur remains encased in a protective plaster jacket was too large to carry, so the Argentine air force brought helicopters to the rescue. It took five men to lift the specimen into the chopper, which delivered the cargo to the tent camp on the shores of Herbert Sound. The specimen was later picked up by the Laurence M. Gould, an NSF-chartered research vessel.

At the Museum of Geology, the reptile was prepared by Michelle Pinsdorf and replicated by Shawna Johnson, both master's degree students of paleontology at the South Dakota School of Mines.

J. Foster Sawyer, of the South Dakota Geological Survey and the School of Mines, found the skeleton while working with Martin at an elevation of 650 feet (200 meters) on Vega Island. Sawyer found vertebrae exposed by wind from the ancient sandy seabed. The bones were embedded in rocks and associated with marine shellfish that suggest the area was a shallow-water marine environment roughly 70 million years ago. Two other partial plesiosaurs were also collected, as well as finds of very advanced shore birds.

Since 1998, expeditions by the American-Argentine team to the area--in part to compare the ancient climates of South Dakota and Antarctica--have secured numerous isolated elements of juvenile plesiosaurs and mosasaurs, a giant marine reptile that looked like an alligator with fins. Martin and his colleagues believe the site may have been a shallow-water area where marine reptiles had their young, and where the young remained until they were of sufficient size and ability to survive in open waters.

Whether plesiosaurs gave live birth has not been proved, but numerous bones and partial skeletons of larger plesiosaurs were found in the same area as the young. Given the long history of plesiosaurs, evolution would have had ample time for them to develop a form of live birth.

The juvenile plesiosaur appears to be related to one discovered in New Zealand in 1874. That plesiosaur was named Mauisaurus and is characterized by a rounded end of the major paddle bone. It was confined to the southern oceans where it existed more than 5 million years.