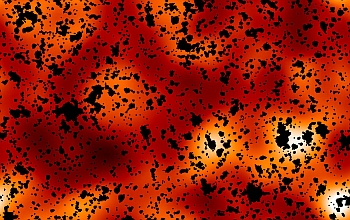 The deepest reaches of space are permeated by a cloak of infrared radiation, an uneven energy swath generated by long-dead objects from the early universe.

Now, researchers have teased apart overlapping signals from that cosmic infrared background, building upon an earlier study to show that uneven patches of energy may actually be clusters of the first objects to emerge from the Big Bang.

The astronomers believe the objects are either extremely bright stars more than 1,000 times more massive than our sun, or quasars, large black holes that consume enormous amounts of gas and debris and re-emit the materials in almost unparalleled bursts of energy. If the patches are star clusters, they may be the first galaxies, smaller than most known galaxies yet containing a mass on the scale of 1 million suns.

With a grant from the National Science Foundation, researchers studied archival data from the calibration of the NASA Spitzer telescope and conducted several stages of cleaning to remove signals from more recent galaxies and other objects to get to the underlying signals.

"Observing the cosmic infrared background is like watching distant fireworks from within a brightly lit city," said lead author Alexander Kashlinsky of NASA's Goddard Space Flight Center in Greenbelt, Md. "It's as if we have turned off the city lights one by one to see the bursts more clearly. While we can't resolve each spark in the fireworks, we can see the large scale structures and their glow."

The new study added observations of four regions of the night sky, two from each hemisphere, to data the telescope collected during a calibration last year. The new observations, with exposure times of up to 25-26 hours per pixel, peered four times deeper into the universe than the earlier effort and greatly expanded the observation area.

Kashlinsky, Richard Arendt, John Mather and S. Harvey Moseley all from Goddard, will publish their findings in two papers in the Jan. 1, 2007, Astrophysical Journal. Co-author Mather shared the 2006 Nobel Prize for Physics for work on another form of background radiation, the cosmic microwave background.

The research was supported by NSF award AST-0406587 and NASA grant Spitzer NM0710076. Science support to NASA Goddard is supplied by Science Systems and Applications, Inc.

Additional information, illustrations and animations are available in the Jet Propulsion Laboratory press release at: http://www.spitzer.caltech.edu/Media/releases/ssc2006-22/