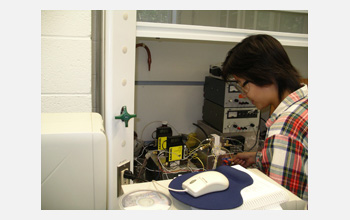 Princeton student Claire Woo at work in the laboratory of Jay Benziger.

In a breakthrough that could make fuel cells practical for such small machines as lawnmowers and chainsaws, researchers have developed a new mechanism to efficiently control hydrogen fuel cell power.

Many standard fuel cell designs use electronics to control power output, but such designs require complex systems to manage humidity and fuel recovery and recycling systems to achieve acceptable efficiency.

The new process controls the hydrogen feed to match the required power output, just as one controls the feed of gasoline into an internal combustion engine. The system functions as a closed system that uses the waste water to regulate the size of the reaction chamber, the site where the gasses combine to form water, heat and electricity.

National Science Foundation (NSF) awardee Jay Benziger of Princeton University developed the new technique with his student Claire Woo, a recipient of an NSF Research Experiences for Undergraduates award and now a doctoral candidate at the University of California, Berkeley. Woo and Benziger published their findings in the February 2007 Chemical Engineering Science, now available online.

The researchers believe the first applications for their technology will be in smaller engines. Fuel cells are currently inefficient on such scales due to the need for fuel recycling and excess hydrogen in standard designs. The researchers' new design is closed, so 100 percent of the fuel is used and there is no need for a costly fuel recycling system.

"The system is ideal for small internal combustion engines that lack emissions controls and are highly polluting," said Benziger. "There is also no need for an extensive hydrogen distribution system for these small motors; the hydrogen could be supplied in returnable tanks such as the propane tanks used for gas grills."

Benziger's next goal is to connect several of the new fuel cells together to increase power, a system that could potentially compete with cells now being tested in the automotive industry.

Feb. 2007 Chemical Engineering Science article abstract: We demonstrate that the power output from a PEM fuel cell can be directly regulated by limiting the hydrogen feed to the fuel cell. Regulation is accomplished by varying the internal resistance of the membrane–electrode assembly in a self-draining fuel cell with the effluents connected to water reservoirs. The fuel cell functionally operates as a dead-end design where no gas flows out of the cell and water is permitted to flow in and out of the gas flow channel. The variable water level in the flow channel regulates the internal resistance of the fuel cell. The hydrogen and oxygen (or air) feeds are set directly to stoichiometrically match the current, which then control the water level internal to the fuel cell. Standard PID feedback control of the reactant feeds has been incorporated to speed up the system response to changes in load. With dry feeds of hydrogen and oxygen, 100% hydrogen utilization is achieved with 130% stoichiometric feed on the oxygen. When air was substituted for oxygen, 100% hydrogen utilization was achieved with stoichiometric air feed. Current regulation is limited by the size of the fuel cell (which sets a minimum internal impedance), and the dynamic range of the mass flow controllers. This type of regulation could be beneficial for small fuel cell systems where recycling unreacted hydrogen may be impractical.