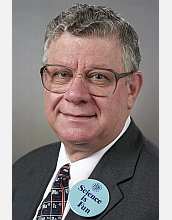 The University of Wisconsin scientist, as a National Science Foundation (NSF) assistant director in the late 1980s, also had a strong role in rebuilding education programs at NSF after many were greatly reduced in the early years of the Reagan Administration.

Shakhashiri will receive the award at a ceremony May 14 at the State Department in Washington, D.C.

"Dr. Shakhashiri has set himself apart from many scientists by broadly communicating science in lectures, radio and television, in the classroom and in public events that have promoted science literacy on a scale wider than most of us have the energy to dream about," said Steven C. Beering, National Science Board chairman.

Shakhashiri, whom the Encyclopedia Britannica describes as the "dean of lecture demonstrators in America," has made more than 1,100 lectures and presentations internationally. He has made numerous appearances on nationwide radio and television, to include his annual PBS program "Once Upon a Christmas Cheery in the Lab of Shakhashiri." He also has made many public appearances to promote the connections between the arts and science, and his renowned multi-volume series of handbooks in chemical demonstrations for teachers is in wide use.

In 1983, Shakhashiri founded the Institute for Chemical Education at the University of Wisconsin. It has since become a national center for research and development, teaching and dissemination of information on chemistry at all educational levels. In the same year, he opened the first-of-its-kind interactive chemistry exhibit at Chicago's Museum of Science and Industry, which has remained permanently on display there.

Another of Shakhashiri's major projects is his Initiative for Science Literacy. His work involves showing future musicians, artists, writers, performers and scientists the interrelationships between forms of inquiry, creativity and personal expression. His work has helped many students and adult learners cultivate the intellectual and emotional links between science and the arts, according to several who know of his efforts.

From radio show hosts to physical scientists, all seem to agree that Shakhashiri has been blessed with a "fearlessness" in reaching audiences, large and small, with his messages of science literacy and the connections between art and science.

In his six years as NSF's assistant director for science and engineering education in the 1980s, Shakhashiri proved, too, to be a fierce advocate for science education programs.

Recipients of the Public Service Award are chosen for their contributions in areas such as: increasing the public's understanding of the scientific process and its communication; contributing to the development of broad science and engineering policy; promoting the engagement of scientists and engineers in public outreach; and fostering awareness of science and technology among broad segments of the population.

The National Science Board initiated the Public Service Award in 1996. The first honorees were named in 1998. The board is an independent 24-member body of policy advisors to the President and Congress on matters of science and engineering research and education, and is the oversight body for NSF, an independent federal agency that supports almost all areas of fundamental research nationwide.