On the Nano Horizon: Emerging Technologies

On May 15, leading experts discuss latest nanotechnology via call-in program 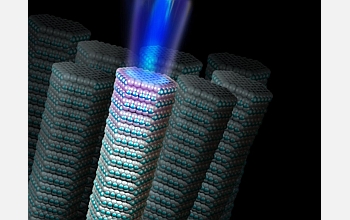 Nanowire lasers are in development in the laboratory of 2007 NSF Waterman awardee Peidong Yang.

On May 15, three of the nation's leading experts on nanoscale science and engineering will participate in a call-in program to highlight the latest nanotechnology developments. The call-in program is an opportunity for reporters to gain both a fresh perspective on the devices and a forum for finding answers to broader nano questions.

The panel includes the 2007 winner of the National Science Foundation (NSF) Waterman Award, Peidong Yang, of the University of California, Berkeley; Barbara Baird of NSF's Nanobiotechnology Center at Cornell University; and Mihail Roco, nanoscale research pioneer and Senior Advisor for Nanotechnology at NSF. The program format will feature an introduction from the participants followed by a question and answer session moderated by NSF's Richard McCourt. Since conference-call lines are limited, the program is open only to reporters, although the entire program and a transcript are now posted online at http://www.nsf.gov/news/mmg/mmg_disp.cfm?med_id=61196&from=mmg.

With implications ranging from shrinking our environmental footprint to nurturing local manufacturing, nanotechnology is poised to drive research well into the future. From nanowire lasers and nanofiber solar cells to drug-delivering molecules and ultra-stable computer memory, nanoscale devices are emerging from laboratories across the United States.

Peidong Yang received a B.S. in chemistry from the University of Science and Technology of China in 1993 and a Ph.D. in chemistry from Harvard University in 1997. Following postdoctoral research at the University of California, Santa Barbara, Yang joined the faculty in the department of Chemistry at the University of California, Berkeley in 1999. Currently associate professor in the Department of Chemistry, Materials Science and Engineering, he is also the deputy director for the Center of Integrated Nanomechanical Systems. Yang also serves as an associate editor for the Journal of the American Chemical Society (ACS). In addition to the 2007 NSF Waterman Award, Yang has received the NSF Young Investigator Award, the Alfred P. Sloan research fellowship, the Arnold and Mabel Beckman Young Investigator Award, the MRS Young Investigator Award, the Julius Springer Prize for Applied Physics, and the ACS Pure Chemistry Award. Yang's main research interests focus on one-dimensional semiconductor nanostructures and their applications in nanophotonics, nanoelectronics, energy conversion and nanofluidics.

Barbara Baird is the Horace White Professor of Chemistry and Chemical Biology at Cornell University. She received her B.A. in Chemistry from Knox College and her Ph.D. in Chemistry from Cornell University. Her postdoctoral studies were carried out in the Immunology Branch of the National Cancer Institute at the National Institutes of Health before she joined the faculty at Cornell in 1980. The Baird research laboratory integrates biochemical, biophysical, and nanotechnology approaches to investigate basic mechanisms of cell surface receptors for mediating transmembrane signals in immune responses, particularly the IgE receptor (FceRI) on mast cells. Baird has led a number of programs at Cornell and her recent positions include Director of the Nanobiotechnology Center (an NSF Science and Technology Center), Director of Graduate Studies in Chemistry, Director of Cornell's NIH training grant in Molecular Biophysics, and Co-Director of the W.M. Keck Foundation Program in Molecular and Cellular Biophysics of Signal Transduction. In addition to several other national advisory groups, Baird currently serves on the Council of the NIH National Institute of Allergy and Infectious Diseases. She was recently elected as a Fellow of the American Association for the Advancement of Science in both Biology and Chemistry.

Mihail Roco, a key architect of the National Nanotechnology Initiative, is the Senior Advisor for Nanotechnology at the National Science Foundation and chair of the Nanotechnology Group of the International Risk Governance Council. Roco is credited with 13 patents and has contributed to over two hundred articles and fifteen books and he is the Editor-in-Chief of the Journal of Nanoparticle Research. Roco coordinated the preparation of the U.S. National Science and Technology Council reports on "Nanotechnology Research Directions" (and the "National Nanotechnology Initiative" and under his stewardship the federal investment in nanotechnology has increased from about $3 million in 1991 to $1.3 billion in 2005-2006. Prior to joining NSF, Roco was a Professor of Mechanical Engineering t the University of Kentucky, and held visiting professorships at the California Institute of Technology, Johns Hopkins University, Tohoku University, and Delft University of Technology. His research included experimental and simulation methods to investigate nanoparticles and nanosystems. Roco is a Correspondent Member of the Swiss Academy of Engineering Sciences, Fellow of the American Society of Mechanical Engineers, Fellow of the Institute of Physics and a Fellow of the American Institute of Chemical Engineers (AIChE). In 2005, he received the AIChE Forum award "for leadership and service to the national science and engineering community through initiating and bringing to fruition the National Nanotechnology Initiative." Roco is a member of several honorary boards and was elected Engineer of the Year by the U.S. Society of Professional Engineers and NSF in 1999 and again in 2004. Forbes magazine recognized him in 2003 as first among "Nanotechnology's Power Brokers" and Scientific American named him one of 2004's top 50 Technology Leaders.

Richard McCourt is a Program Officer in the Division of Biological Infrastructure. He is a biologist interested in the phylogeny and evolution of green algae and plants, and uses molecular data to reconstruct evolutionary histories. His home institution is the Academy of Natural Sciences in Philadelphia, where he studies the molecular phylogenetics and evolution of green algae and plants. He has written on science for the public and free-lanced for the science reporting unit at National Public Radio.