Three Wishes for a Future Internet? GENI Project Will Soon Be At Your Command 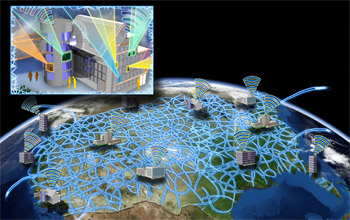 GENI is envisioned as a set of several diverse components combined with software management.

If the proverbial genie gave Internet users three wishes for an improved network what would they ask for? Peace of mind about secure financial transactions? Protection from hackers? Inventive new applications that improve the quality of life?

With support from the National Science Foundation (NSF), researchers are working together to design a bold new research platform called GENI, the Global Environment for Network Innovations. As envisioned, GENI will allow researchers throughout the country to build and experiment with completely new and different designs and capabilities that will inform the creation of a 21st Century Internet.

Today, NSF announced that BBN Technologies, under the leadership of Chip Elliott, has been selected to serve as the GENI Project Office (GPO). The office will work closely with broad networking communities to create and develop the GENI design.

The creation of a project office, which received an award of $2.5 million per year for up to four years, is a major step in the NSF process to build major research facilities and marks a key step toward making GENI a reality.

"In a little more than 25 years, the Internet has gone from an obscure research network to a critical piece of the national communication infrastructure," said Deborah Crawford, acting assistant director of NSF's Computer and Information Science and Engineering directorate. "But an Internet fundamentally better than today's may require large-scale, systematic research initiatives focused on the hardest scientific and technical challenges, driven by overarching visions of how the future might look."

"GENI will give scientists a clean slate on which to imagine a completely new Internet that will likely be materially different from that of today. We want to ensure that this next stage of transformation will be guided by the best possible network science, design, experimentation, and engineering," said principal investigator and project director Chip Elliott of BBN.

BBN Technologies, an advanced technology solutions firm, has locations in Cambridge, Mass., and Washington, D.C. The company has been at the forefront of technological change for more than 50 years and is known for pioneering the development of the ARPANET, the forerunner of the Internet.

The GENI Science Council (GSC), composed of research leaders in computer networking, distributed systems, cybersecurity, optical networking and other related fields will represent research-community interests by working closely with the GSC. Together, GSC and the GPO will first carry out preconstruction planning for the facility.

"This is a tremendous opportunity for the research community to define a research platform that can enable breakthroughs as important as those made in fields such as physics and astronomy, where large NSF-funded experimental facilities have long played a crucial role," said GSC representative. "We look forward to working with our GPO colleagues and the community to examine the scientific, technical, economic and social opportunities and implications GENI provides."

The idea for the GENI project dates back to an NSF workshop held in early 2005. There, a team of researchers led by Princeton University's Larry Peterson, envisioned that GENI would consist of a collection of physical networking components, including a dynamic optical plane, forwarders, storage, processor clusters, and wireless subnets. These resources are collectively called the GENI substrate.

On top of the substrate, a software management framework will layer network experiments on the substrate. Each experiment--there may be thousands going on at the same time--will run in a slice of the substrate. In concept, GENI components are programmable, which will make it possible to embed experiments, including clean-slate designs that are radically different from today's Internet architecture and protocols. The virtual substrate will also allow thousands of slices to run simultaneously, including some experimental services and architectures that can run continuously.

And, GENI will include mechanisms that allow end users to participate in and evaluate new, experimental services under real-world conditions. Finally, GENI will be modular, with a well-defined architecture and set of interfaces that will make it possible to extend GENI with new networking technologies as they become available and maintain a dynamic infrastructure that is continually renewed.

"GENI creates an opportunity for stunningly ambitious research," said BBN's Elliott. "NSF's support of this initiative will ensure that brilliant minds across the whole sweep of networking and distributed-system research have the opportunity to try a wide variety of innovations in a very large-scale, shared experimental environment."