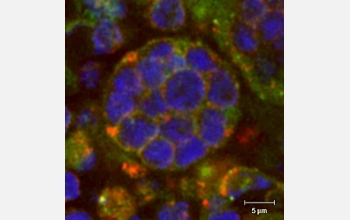 Developing T cells, or thymocytes, are engulfed within a "nurse" cell.

"Nurse cells" play an important role in deciding which developing infection-fighting cells, called T cells, live and which die, according to research funded by the National Science Foundation (NSF) and reported in the June issue of the journal Experimental Biology and Medicine.

The infection-fighting cells, known as thymocytes or T cells, live in the thymus, an organ in the upper portion of the chest. Loss of the thymus results in severe immunodeficiency and increased susceptibility to infection. The function of T cells produced by the thymus is to recognize harmful invaders. Once invaders have been identified, T cells then attempt to eliminate disease-infected cells.

"In early studies, it was suggested that thymic nurse cells only removed non-functional thymocytes," said Eve Barak, program director in NSF's Division of Molecular and Cellular Biology. "This research shows that nurse cells are performing a much bigger role in the thymus than we thought."

Thymic nurse cells were given their name because of their close relationship with thymocytes. These nurse cells have been reported to take up as many as 50 destined-to-die thymocytes into their own cell bodies.

Thymic nurse cells were discovered in 1980. Their existence was debated because many scientists found it difficult to believe that a cell could internalize another cell, said Jerry Guyden, a biologist at the City College of New York and lead researcher.

The thymus is present in most vertebrates, with a similar structure and function as the human thymus. Animal thymic tissue sold in butcher shops or at meat counters is known as sweetbread.