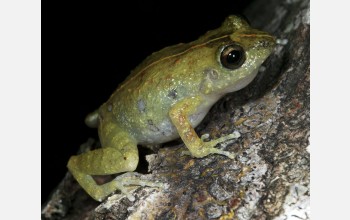 The ancestors of this frog in Haiti rafted there on a voyage across the Caribbean.

Nearly all of the 162 land-breeding frog species on Caribbean islands, including the coqui frogs of Puerto Rico, originated from a single frog species that arrived on a sea voyage from South America. They came 30 to 50 million years ago, according to DNA-sequence analyses by scientists at Penn State.

Similarly, the scientists found that the Central American relatives of these Caribbean amphibians also arose from a single species that arrived by raft from South America.

"This discovery is surprising because no previous theories of how the frogs arrived had predicted a single origin for Caribbean terrestrial frogs, and because groups of close relatives rarely dominate the fauna of an entire continent or major geographic region," said Blair Hedges of Penn State, an evolutionary biologist who directed the research. "Because connections among continents have allowed land-dwelling animals to disperse freely over millions of years, the fauna of any one continent is usually a composite of many types of animals."

The results will be published in the June 12, 2007 issue of the Proceedings of the National Academy of Sciences and posted in the journal's online early edition this week.

The field work for the study required nearly three decades to complete because many of the species are restricted to remote and isolated mountain tops or other inaccessible areas. Some species included in the study are believed to be extinct because of habitat degradation and other causes.

"This study is a valuable contribution to our understanding of the evolutionary and biogeographic history of one of the world's most complicated places geographically, the Caribbean," said Patrick Herendeen, program director in the National Science Foundation's division of environmental biology, which funded the research. "The research presents strong evidence that this group of frogs reached the Caribbean islands by dispersal."

A recent global assessment of amphibians found that the Caribbean Islands have the highest proportion of amphibian species threatened with extinction.

"Discovering a single origin for all of these species throughout the Caribbean islands was completely unexpected," Hedges said.

To make their discovery, the researchers sequenced the DNA of nearly 300 species of Caribbean, Central American, and South American frogs.

The study's DNA research revealed that, while many ocean dispersals may have occurred over time, only two led to the current faunas: one for the Caribbean islands and another for Central America.

The original frogs that successfully colonized the Caribbean islands likely hitched a ride on floating mats of vegetation called flotsam, the method typically used by land animals to travel across salt water. It's not likely that the frog species dispersed simply by swimming because frogs dry out easily and are not tolerant of salt water.

In addition to the study's discoveries about Caribbean and Central American frogs, the research also revealed an unusually large and unpredicted number of frog species in South America.

"The South American frog group may have more than 400 species, and is mostly associated with the large Andes mountains of South America," Hedges said.

Hedges and coauthor William Duellman of the University of Kansas conducted much of the field work. A third co-author is Penn State graduate student Matthew Heinicke, who performed DNA sequencing and analysis. The research was also supported by the NASA's Astrobiology Institute.