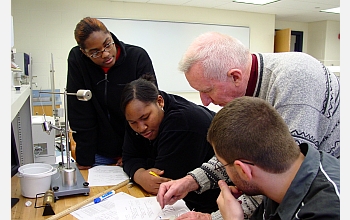 Students' performance on annual math and science assessments improved in almost every age group when their schools were involved in a program that partners K-12 teachers with their colleagues in higher education.

While an earlier study tracked schools that began work in the first year of the National Science Foundation's (NSF) Math and Science Partnership program (MSP), the most recent study followed more than 300 schools participating in partnerships that began to be funded during the program's second year.

Participating school districts found that a significantly higher proportion of students scored at the "proficient" level or higher on state math and science assessments in the 2004-2005 school year than they had in 2003-2004. The only exception was in science at the middle school level, where student performance stayed the same (see accompanying chart).

Progress among elementary math students was particularly noteworthy, with student proficiency rising by more than 15 percentage points from one school year to the next.

The MSP currently supports 52 such partnerships around the country that unite some 150 institutions of higher education with more than 550 school districts, including more than 3,300 schools in 30 states and Puerto Rico. More than 70 businesses, numerous state departments of education, science museums and community organizations are also partners.

"Teachers don't just have to learn more math and science," says Joyce Evans, a program manager in NSF's directorate for education and human resources. "They need to learn to become an expert resource for their colleagues."

Established in 2002 to integrate the work of higher education with K-12 and to strengthen and reform mathematics and science education, MSP was enhanced in 2004 with the addition of teacher institutes for the 21st century.

While NSF has funded development programs for teachers since the 1950s, the MSP teacher institutes not only have an intense focus on subject matter expertise but also an emphasis on leadership development. More than 3,000 teachers participated in 12 such institutes around the country in the 2006-2007 school year.

Typically teachers work intensively with higher education faculty in the STEM (science, technology, engineering and mathematics) disciplines during the summer months to gain deep content knowledge, earn necessary certifications or degrees and receive mentoring from their higher education colleagues. The goal is for participating teachers to become school- and district-based intellectual leaders in mathematics or the sciences.

Student outcomes are beginning to parallel growth in teacher knowledge gained from participating in the Teacher Institutes. For example, in the 2005-2006 school year, a population of students with teachers who took part in the Rice University Mathematics Leadership Institute performed better on both the Texas state mathematics assessment and the Stanford 10 mathematics assessment (a national standardized test) than students of non-institute teachers in the same grades at similar schools.

"The institutes are helping us build capacity, bringing teacher-leaders in the STEM disciplines to districts around the country," says Evans. "This will continue to benefit their math and science students."