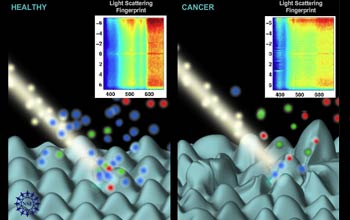 Light is showing promise as a tool for cancer detection.

As part of a call-in program, three of the pioneers behind this approach will be joined by an outside expert on biophotonics to discuss new research results presented in the Aug. 1, 2007, Clinical Cancer Research, a journal of the American Association for Cancer Research, regarding pancreatic cancer detection and the context for the findings.

Richard McCourt is a program officer in NSF's Division of Biological Infrastructure. He is a biologist interested in the phylogeny and evolution of green algae and plants, and uses molecular data to reconstruct evolutionary histories. His home institution is the Academy of Natural Sciences in Philadelphia, where he studies the molecular phylogenetics and evolution of green algae and plants. He has written on science for the public and free-lanced for the science reporting unit at National Public Radio.

Vadim Backman is professor of biomedical engineering at the Robert R. McCormick School of Engineering and Applied Science at Northwestern University and chairman and cofounder of American BioOptics, LLC. Backman's research interests are in the area of optical imaging, primarily focusing on minimally invasive optical diagnosis and imaging of early cancer. He received his doctorate in medical engineering from the Harvard University-Massachusetts Institute of Technology Division of Health Sciences and Technology in 2001 and joined the Northwestern faculty that year. He is the recipient of many awards, including the NSF CAREER Award and the Wallace H. Coulter Foundation Early Career Translational Research Award in Biomedical Engineering. In 2004, Backman was selected as one of Technology Review's TR100, a worldwide list of the top 100 innovators under the age of 35. Backman is the author of more than 200 publications.

Randall E. Brand is a gastroenterologist and clinical researcher who specializes in pancreatic carcinoma and other gastrointestinal malignancies. He is recognized nationally for his expertise on hereditary pancreatic cancer-prone families and the early detection of pancreatic cancer. He is director of Endoscopic Ultrasound and clinical director of the Pancreatic Cancer Research Program at Evanston Northwestern Healthcare. He received his medical degree and completed his residency at the University of Michigan, and completed his fellowship at the University of California, San Francisco. He is an associate professor at the Feinberg School of Medicine, Northwestern University.

Hemant K. Roy is a practicing gastroenterologist who directs the GI Research program at Evanston-Northwestern Healthcare and co-directs the GI Oncology Research group at Lurie Comprehensive Cancer Center at Northwestern University. His research interests are in early detection and chemoprevention of colon cancer. Roy has a basic science group that is focused on elucidating mechanisms of chemopreventive agents. Roy has been working with Vadim Backman for more than 5 years on applying biophotonics to colon cancer screening.

Frank Chuang is a medical scientist at UC Davis Medical Center in Sacramento and an associate director of the NSF Center for Biophotonics, Science and Technology (CBST). After receiving his undergraduate degree in bioengineering at the University of California, Berkeley in 1987, Frank joined a team of clinical researchers at Lawrence Berkeley National Laboratory to develop one of the first systems to treat surgically-inoperable brain tumors using accelerated heavy charged-particle beams. In 1990, Frank received a fellowship from NIH to join the Medical Scientist Training Program at the Mount Sinai School of Medicine in New York. After completing his medical training and receiving a doctorate in immunology and biophysics, Chuang returned to California as a post-doctoral research fellow at the Lawrence Livermore National Laboratory (LLNL). In the Division of Medical Physics and Biophysics, he was the lead biomedical scientist for several projects developing new in vitro diagnostic systems for rapid, multiplex detection of microbial pathogens, and has written numerous papers and book chapters on optical methods of biodetection. Chuang also works in part for the LLNL-UC Davis Integrated Cancer Center and is leading the effort to develop clinical applications for a revolutionary new compact proton accelerator being designed and built at the laboratory.